It was well-known before the announcement of Galaxy S10 that the handset could boast “reverse wireless charging.” On February 20, Samsung said that the Galaxy S10+, S10e, and S10 would be arriving with Wireless PowerShare. This can be used to charge another supporting handset using the battery of your device. 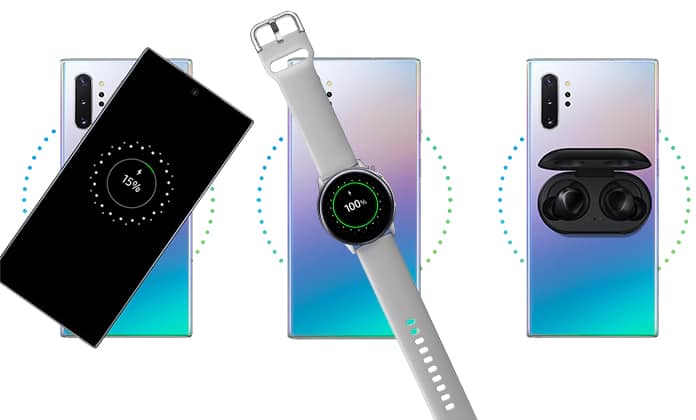 Below, we go into further detail about how Wireless PowerShare works. We provide you with all the details that you need to know to maximize the potential of this feature.

All About Wireless PowerShare

Samsung’s Wireless PowerShare is basically a reverse wireless charging feature. It allows you to share the power of your Galaxy S10 with another handset by placing it “back-to-back” with the phone you want to charge. This feature will work with most Qi-equipped phones so it’s not restricted to just Samsung handsets. As a result, you can even charge iPhones with this feature.

We recommend using this feature to power up your Gear/Galaxy smartwatch or Galaxy Buds because other phones will take a while to charge. In addition, the two devices will need to be kept flat against each other to ensure the connection doesn’t cut off. Wireless PowerShare would come in handy when you want to bring a dead smartphone to life.

With that said, it’s not a quick wireless charge by any means. You get 4.5W. This, when experienced on a practical basis, is 50% of what standard Qi wireless charging devices are rated (9 to 10W). On the Wireless Charger Due, the Fast Charge wireless charging is 7.5W in rating. Hence, you’ll get around 10% charge in half an hour on a Qi-equipped device using Wireless PowerShare. Hence, you can use the feature for phones that are equipped with tinier devices such as Galaxy Buds.

Besides all that, you get a Dual charging feature with Wireless PoweShare. Users can connect the Galaxy S10 to an outlet using a wire and place another phone on the back of the device. Its battery will be wirelessly charged along with the battery of the other handset. So, when you get out of bed in the morning, you’ll have both your Galaxy Watch or Buds and Galaxy S10 fully powered for the day.

Steps to Use Wireless PowerShare

It’s extremely simple to use Wireless PowerShare on Galaxy S10. Make sure the device is at least 30 percent charge for the feature to work.

Then, open “Quick Settings” by swiping down from the display’s top, then tap the icon for Wireless PowerShare to activate it, and then put the device down on a flat surface. Now put the handset you want to charge at the Galaxy S10’s center back-to-back. When charging starts, a chime will go off as a notification. To end charging, separate the individual devices, as Wireless PowerShare will switch off if the device isn’t identified in 30 seconds.

Overall, Wireless PowerShare is an excellent feature to have. Even if someone isn’t going to use it, you’ll bee having peace of mind knowing there’s a backup charger on your device.

What are your thoughts on Wireless PowerShare? Will you be using it to charge other devices or gadgets like smartwatches? Let us know in the comments section below.