Recently Apple introduced a “Battery Health” feature for iOS 11.3 (beta 2) that has a sole purpose of telling you about the condition of your iPhone and it’s battery too. This feature can only be used on iPhone 6 and the other versions that came after it but in case you don’t want to use that feature and want to disable it then don’t worry because you are at the right place, reading the right article. If you ever feel like the power management feature is useless for you and your device is running absolutely fine then there is nothing wrong with disabling this feature. 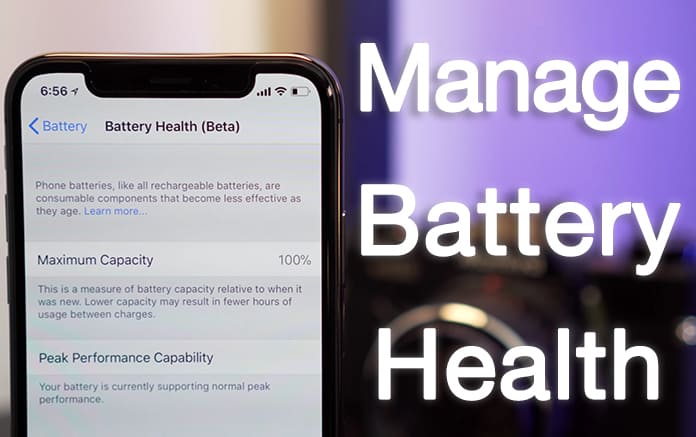 Everything you Need to Know About the New Battery Health Feature

However, the fact remains the same that the battery life and the performance of your Apple device will eventually decrease and it will have to be replaced just like any other handset.

What You Need To Note Before you Disable Battery Health

When you update your device to iOS 12, the battery health feature will remain disabled until your handset unexpectedly shutdowns. It will be activated on the first shutdown of your iPhone. On the other hand, this feature is pretty much cool as it shows you all about the performance of your iPhone and the capacity of your battery too. With it you can easily keep track of how much life of your battery is left and when is it the time to replace it.

The Messages You See Regarding The Performance Management Feature

Also, there will be a visible difference in the messages your iPhone shows when the performance feature is activated and when it is not activated. When you haven’t enabled the performance management feature, you will see a message like this, “Your battery is currently supporting normal peak”. 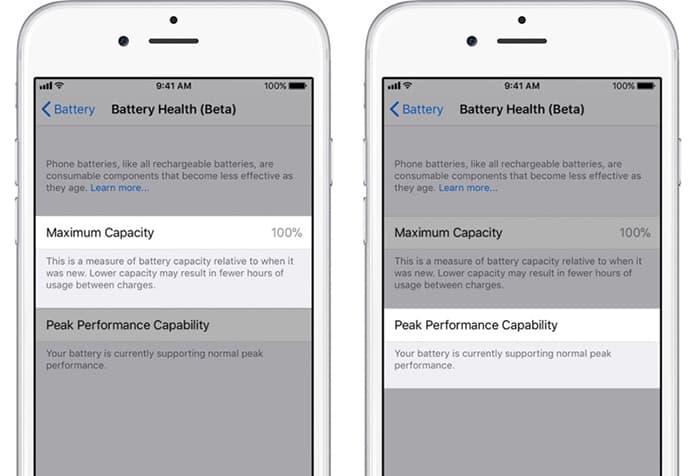 And when the performance feature is activated, you will see something like this on your screen,

“Your iPhone has experienced an unexpected shutdown because your battery is not delivering the peak power. The performance manager will however help you in avoiding such shutdowns.” 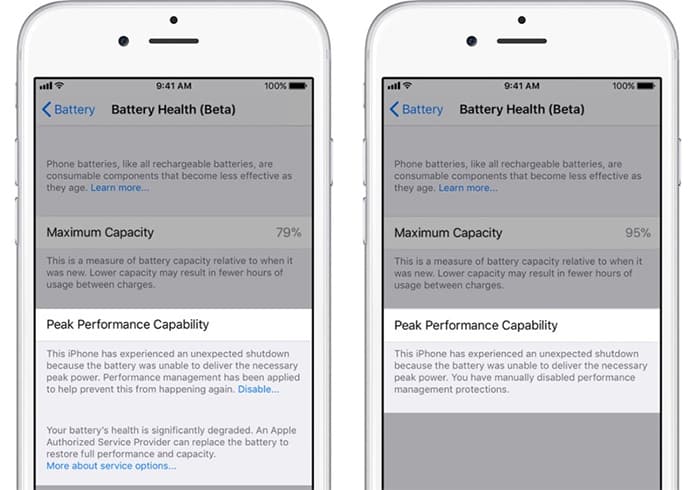 Also, there can come a time when your iOS will be unable to determine it’s “battery health” feature and in such cases you will see a message like,

“This iOS is currently unable to identify the battery health, the battery can be serviced by an Apple authorized service provider.”

This basically happens when the battery of your iPhone is installed in an improper way or if the battery part is unknown.

How To Know If The Battery Health Is Affected?

Now many of you might be having this question in your mind that what message or sign is an indication that the battery of your device is losing its performance rate? Well, don’t worry because we are here to answer you that too, if your battery is degrading then you will get this message,

“The battery health of your handset is drastically degraded. You can get the battery replaced by an Apple authorized service provider in order to restore its full capacity and full performance.”

Here are some more effects that are an indication that your battery needs to be replaced;

These are a few indications of a poor battery performance and the “battery health” feature is pretty useful as it will help you in tracking down the performance of your overall handset and its battery capacity.