It has been a while since the release of iOS 6. Initially, beta 1 was released, and then came beta 2, followed by beta 3. The latest available firmware has been iOS 6.1 beta 5. 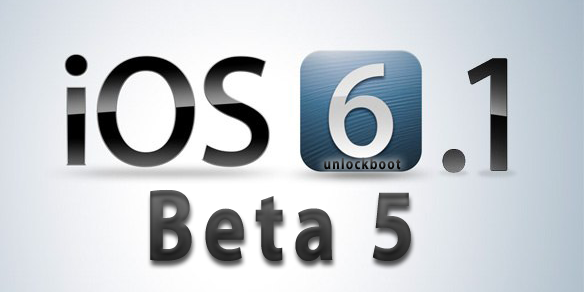 There were many new features included in the new firmware such as Siri searching for entertainment content, making reservations and the Find my lost iPhone along with new iCloud features.

As we’re a site syndicated towards helping the unlocked readers in any way possible, we know that they would be afraid to update to the beta version of iOS 6.1 because of the risk of losing their unlock. Well, they don’t have to worry as a company has their back. OfficialiPhoneunlock is the most reliable factory unlock service provider that came on the scene in recent times, providing the most affordable unlock services for all iPhone models, including the latest released Phone 5.

iOS 6.1 beta 5 is available for those who have a registered Apple developer’s account, and those who had the previous beta version would have automatically received the update notification over the air, and in case they didn’t, they can just use iTunes Connect to get it.

The iOS 6.1 beta 5 is also available in our download section. The previous beta was reported to have a great effect on the battery, and this new version seems to do even better. A lot of bugs have been addressed as well.

Dear readers, we have also read the news about iPhone Unlocking being declared illegal. However, you should note that’s only for U.S. Furthermore, you can’t use the unlocked iPhone in the country of the carrier which has blacklisted it, so it doesn’t have an effect. All unlock prices from our official partner remains the same.
After the unlock, you can use your handset on any carrier in the world, without hesitating to update to new firmwares and basebands.