Many of the users stuck on iPhone 4 baseband 4.11.08 were able to get their iPhones unlocked through the SAM Unlocking Solution released by Loktar_Sun. 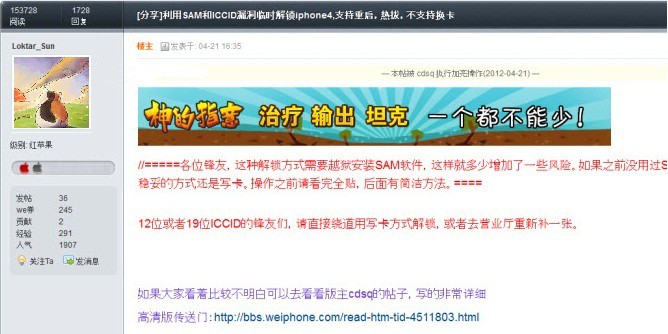 It has been considered as one of the best unlock solution since ultrasn0w which unlocked iPhone 4 baseband 1.59.00.

Here’s an interview with the hacker who released the free unlock solution. Weiphone.com was the first website where he posted the step by step guide on 21st April 2012. After the post on Chinese website, the unlock method was proven to work and trending worldwide like lightning. The next day, all the top blogs had a post about it and it worked for many like magic.

There’s no new tool developed for this unlock and the hacker used Sam_Bingner’s SAM (Subscriber Artificial Module) Preferences and manipulated it via iTunes to make it work. Why didn’t hackers such @MuscleNerd think about it before? Rumors say he knew about it but didn’t reveal it to the public for some reason.

Here’s the interview with Loktar_Sun:

Q: How much time did you spend developing this method?

Previously I used SAM to fix push typical notifications issues, that’s when I noticed that there seems to be a vulnerability with the iPhone’s ICCID.

Many people thought it was me who discovered this exploit, but actually it’s not. This exploit has been around for quite a while now but nobody would have thought Apple would (carelessly) come up with an exploit like this. When I found out the potential use of this exploit, I spent one whole afternoon to develop the steps.

If I didn’t come up with this method that day, I believe sooner or later someone would have done the same thing. There are other people who are smarter than me.

Q: Is this unlock permanent?

At this point it’s a permanent unlock tied to a SIM card. This method basically tricks Apple’s activation loophole and it’s not the same as Apple’s official factory unlock/activation. The iPhone is still considered locked in real sense.

Q: Can this method be added as a source in Cydia?

I’ve never written or developed any iOS apps before, but I know China based hackers called ChinaSnow has started writing a program and will make it available very soon. Their Cydia source is ultra.chinasnow.net.

Q: Is it true that Applenberry is using the same method to unlock baseband 4.11.08 and 4.12.01 with their newly released Gevey SIM?

This I’m not too sure. If they’re using the same exploit, once this is patched (by Apple), Gevey Ultra will be rendered useless. I’m hoping that they’ve already found a bug with the baseband so that if Apple patches the ICCID exploit, everyone can still continue using the SIM interposers.

Q: How do you feel to be an overnight internet stardom?

It’s very exciting, I did not expect so many people, especially foreign friends who acknowledged my work. I hope that the I can make a better contribution to the iPhone unlock and jailbreak community in the future. Last but not least, there are people pretending to be me on Twitter, it’s very flattering but I would like to clarify that I don’t have a Twitter account.

The 24 year old lives in Beijing and has joined the workforce not too long ago. You can follow our guide to Unlock iPhone 4 baseband 4.11.08 with SAM. If you don’t want the SAM unlock solution, you can go for the hardware unlocks in the form of Gevey SIM and R-SIM 4.