The iPhone 8 has finally been introduced to the world and it will officially be launched in November. Samsung has had a rough couple of years ever since its Note and Galaxy series started heating and then blowing up. But it made a very impactful comeback along with a sense of responsibility with the Galaxy S8 and Note 8. Both these stunning flagship phones feature spectacular and eye-catching designs coupled with several high-end features that really stand out. The Samsung war with Apple has been there forever and has intensified ever since the inception of their latest handsets so here is where you see iPhone 8 vs Galaxy S8. 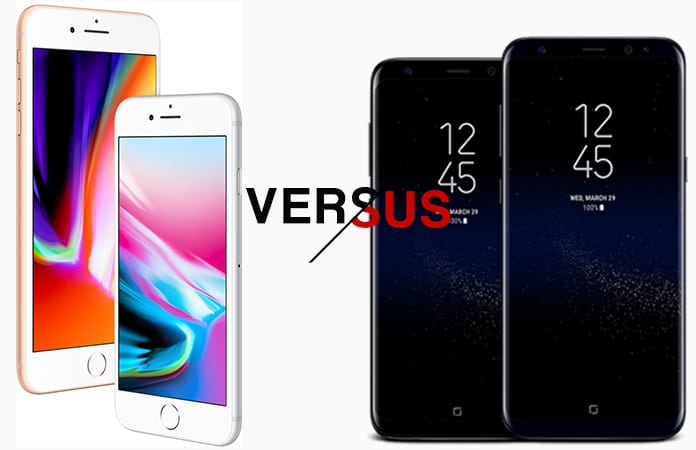 A little heads up, most of the technology that has now come to the iPhone 8 has already been introduced before to the Samsung Galaxy S8 but we all know by now that Apple isn’t much of a pioneer when it comes to innovation as it used to be in the early days. That, however, has not stopped its immense fan base from increasing and putting into consideration the sale volume, it would be fair to say that neither has it put a dent on its stellar reputation. This time Apple has jacked its prices up with not only the iPhone 8 and 8 Plus with the whole world being awed by the $1000 price tag on its X model.

These are all the updated known specs of the competition between iPhone 8 vs Galaxy 8: 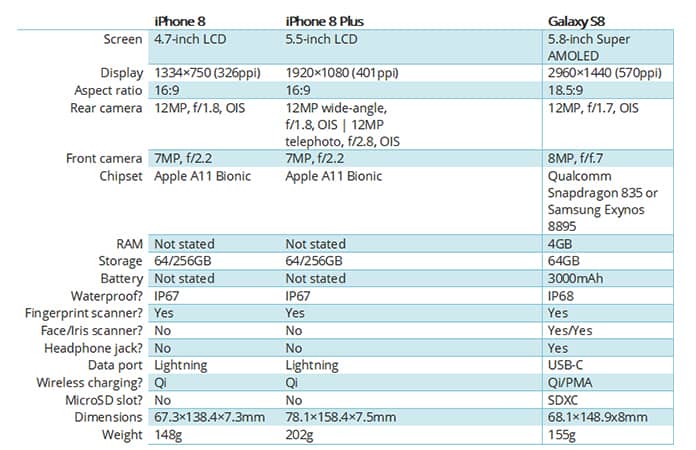 The Galaxy S8 is next level is a very futuristic looking phone and rides in another dimension. It has a curved AMOLED display that smoothly aligns itself to the metal and glass back and rests in a comfortable manner in your hands. 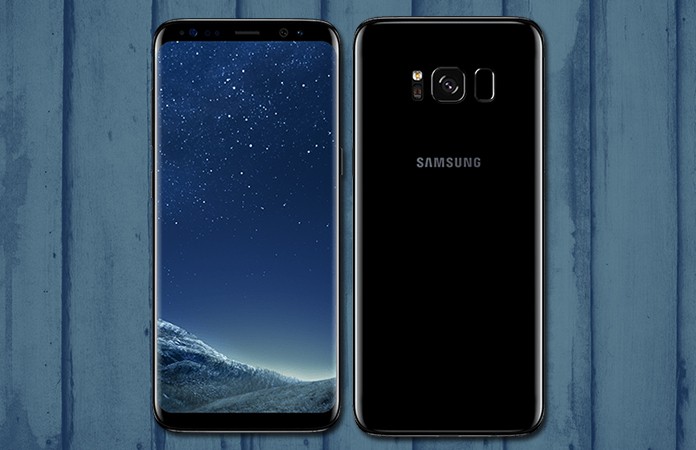 It sports a 5.7-inch display which may not be too big for a lot of folks out there since the trend of phone screens is leaning towards “the bigger the better” mentality. It could be rightly said, it’s the smallest big phone there is thanks to its narrower and taller design.

A speaker, USB-C port, and headphone jack are placed on the base of the S8 while the fingerprint scanner lies next to the camera module on the back and to be honest, we all know that it’s a very misplaced spot.

The iPhone 8 is devoid of the headphone jack and despite the demand, Apple is probably never going to bring that back. However, in this battle between iPhone 8 vs Galaxy S8, the similarity is that both are water-resistant. 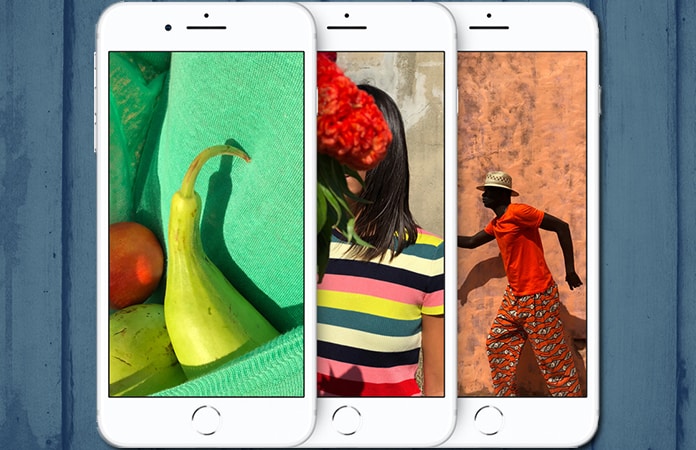 The iPhone 8 looks just like the iPhone 7 with the only difference being that of the newly introduced glass back but since we haven’t gotten our hands on it yet, it would be fair to assume that the Galaxy S8 is the better-looking phone. 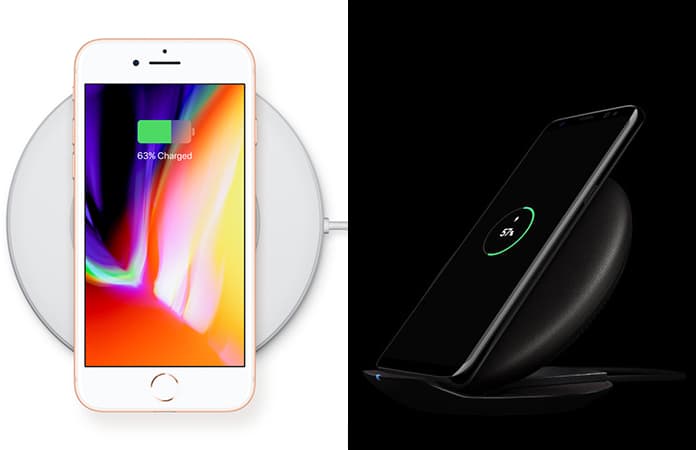 Samsung and Apple offer a lot of diversity in colors with their flagship phones and have large and medium-sized models e.g. The S8 Plus has a 6.2-inch, while the iPhone 8 Plus display is 5.5-inches.

iPhone 8 vs Galaxy S8 Specs: Which is More Powerful?

Both the phones offer great speed and the new models of the iPhone are said to be freakishly fast. The Galaxy S8 is equipped with a Snapdragon 835 processor (Exynos 8895 in Europe) along with 4GB RAM. Apple’s iPhone 8, on the other hand, uses an A11 chip that takes root from the same 10nm manufacturing process as both the 835 and Exynos 8895.

The display screen is where Apple and Samsung part ways. The Galaxy S8 possesses a quad-HD 5.7-inch AMOLED Infinity Display that stretches edge-to-edge that lets you have access to HD content on YouTube, Prime Video and Netflix. However, the iPhone 8 and 8 Plus remains loyal to its IPS LCD panel supporting the same resolutions as the previous phones.

To come towards the camera, the Samsung Galaxy S8 is equipped with a single 12-megapixel camera with a f/1.7 aperture and it takes crisp and beautiful pictures without the hassle of shifting through multiple modes. The iPhone 8, on the other hand, showcases a 12MP camera whereas the iPhone 8 Plus is equipped with a dual 12MP camera with a f/1.8 aperture and f/2.8 aperture. 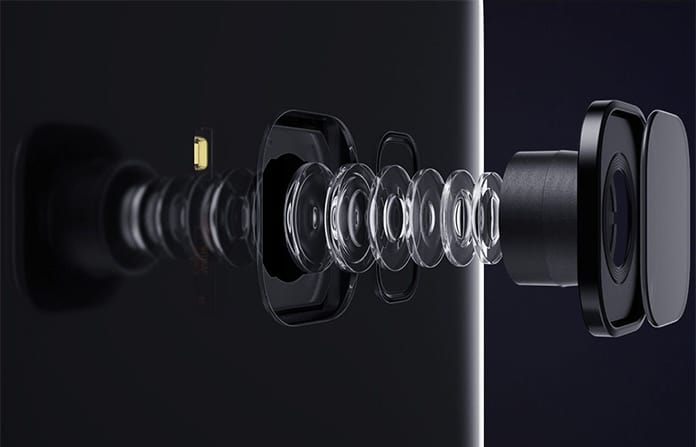 Apple claims that the new cameras have better auto-focus, built-in noise reduction and bigger sensors along with the introduction of a new feature named ‘Portrait Lighting’ mode which uses the cameras to adjust the lighting on a person’s face. 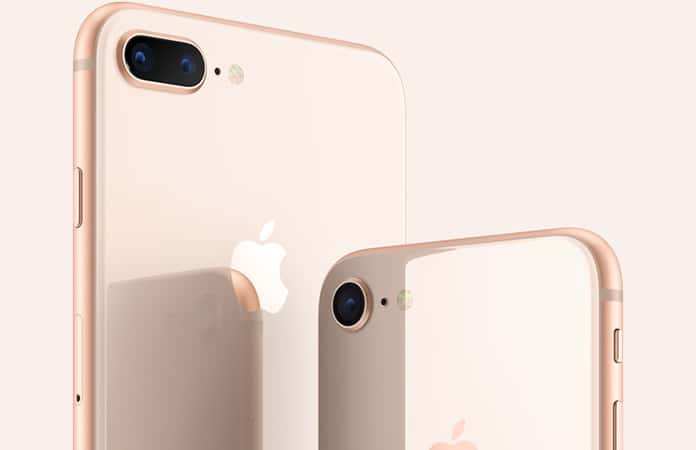 Design: The Samsung Galaxy S8 has an edge-to-edge display with a curved structure overall and a super AMOLED screen that melts into the metal whereas the iPhone 8 has a glass back. As you will have seen in the spec chart, in the beginning, the phones are IP-rated for water-resistance. Not to forget to mention again, only the Galaxy S8 has a headphone jack.

Specs: Nevertheless, both these high-end phones have top of the line specs as the Galaxy S8 is equipped with a Snapdragon 835 CPU whereas the iPhone 8 has an A11 chip. The new chips are seen to be very fast and have an insanely fast response time unlike any other phone we have come across. Apple remains loyal to the Retina LCDs for the 8 too (with the exception of the iPhone X for which there is a Super Retina Display) while on the other hand, Samsung keeps its AMOLED screen.

Hope this helps you to decide which smartphone you’re going to purchase. Let us know in the comment who wins, The Apple iPhone 8 or The Samsung Galaxy S8?