The software exploits a vulnerability in the latest Apple-version, was sold by a hacker known as iH8Sn0w.

A few hours after the release of the iOS 5.1 firmware, iPhone Dev Team has released a new Redsn0w 0.9.10b6 version, which allows tethered iOS 5.1 jailbreak for the iPhone, iPad and iPod touch. This exploit is only compatible with iOS-devices with the A4 chip. To crack the A5 gadgets the attackers need to find a new bootrom-level vulnerabilities. 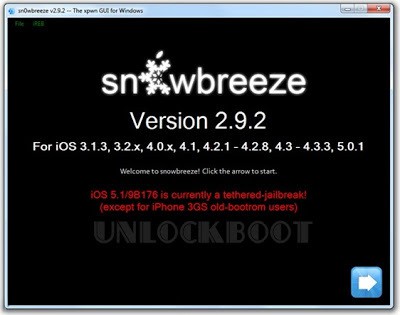 Sn0wbreeze 2.9.2 software tool is almost complete analog Redsn0w for Windows. It implements a tethered iOS 5.1 Jailbreak for iPhone 4, 3GS, iPad, and an iPod touch 3G and 4G. One of the main functions Sn0wBreeze 2.9.2 is the ability to create Custom iOS 5.1 firmware to jailbreak iOS 5.1, which does not increase your Baseband version.

Note: For those who expects Untethered iOS 5.1 Jailbreak, the iPhone Dev Team does not recommend to upgrade to iOS 5.1. Right now, users have a choice: the original version to correct errors and add support for the Japanese Siri (thanks to the new firmware) or wait for the Untethered iOS 5.1 Jailbreak. The new exploit, which is preparing to release, will allow cracking the A5-based devices.