The incredible popularity of the game Flappy Bird has led to a huge number of clones of the project for all possible platforms. Now, the users will be able to play this game on their Smart Watches.

Many developers called the game Flappy Bird the new “Hello World”, which means that this game must be present on any Operation System and device. 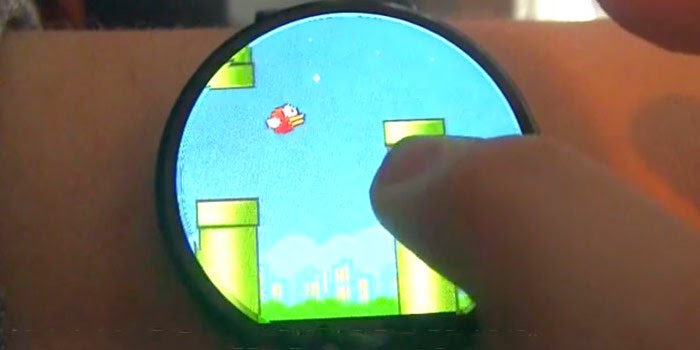 The developer with the nickname Corbin Davenport was upset that on his smart watch Moto 360 he can’t play his favorite game, so he found a night off and moved the adventure birdies on wearable platform.

The programmer version runs smoothly on the TI OMAP 3 processor – there are even sound effects. To enjoy the game just download the modified APK-game file and the Android console application. According to subjective feelings, playing Flappy Bird on the clock is even more difficult than on smartphones and tablets.

Nguyen Ha Dong released Flappy Bird on May 24, 2013 for iOS. January 30, last year, the game was released on Android. In the same month, the project took first place in the charts of App Store. Flappy Bird vanished from digital stores February 9, 2014.

Last year the game was downloaded more than 50 million times. Soon, some players tried to cash in on this and began to sell the iPhone with a game on eBay / Developers imitated Vietnamese game designers and produced games like Flappy Bird. One of them even managed to move the game on PS Vita. After that Apple and Google have refused to accept the App Store and Google Play application clones.