Finally, after rumors and teasers, Samsung has finally unveiled the 9th Edition of their S series, Samsung Galaxy S9 and Samsung Galaxy S9+. So undoubtedly many tech enthusiasts, reviewers and of course the public was talking about it. Whenever a new Samsung phone or an iPhone is released, so because of their rivalry many compare the two with each other. Hence, we will compare the latest models from both Samsung and Apple, the Samsung Galaxy S9 vs. iPhone X. 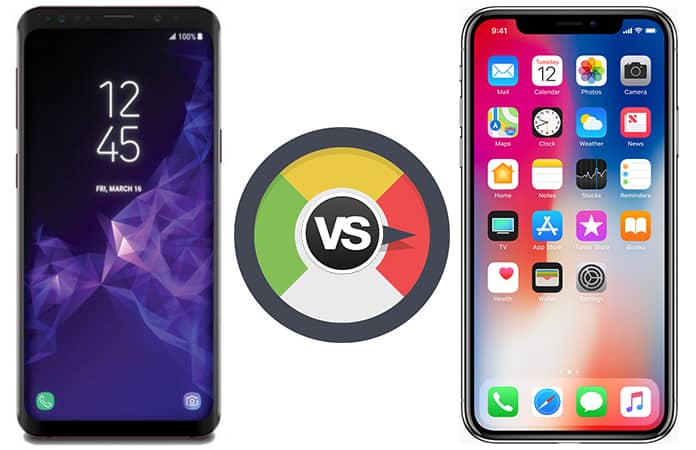 Both the Samsung Galaxy S9 vs. iPhone X are the flagship phones of their manufacturer Samsung and Apple respectively. Usually techies and public compare the two Samsung Galaxy S9 vs. iPhone X with features and camera quality. Though they are important but we focus on the most necessary element of the smartphone its core CPU performance, hence how smooth and fast the device is running.

The latest Galaxy S9 comes with the new Exynos 9810 chip and compare it to the last year’s Apple iPhone A11 and A10 chip is outperformed by Apple. The test done on both of the devices was the Geekbench 4 single-core. However, when comparing the performance against Galaxy S9 predecessor the Samsung Galaxy S8, the S9 outpaced it in the CPU processing performance.

Though, it is expected that the newer model should beat out their predecessor models, so the true comparison is with the Samsung Galaxy S9 vs. iPhone X. So what the result showed us? Well, the Geekbench 4 test for Samsung Galaxy S9’s Exynos 9810 gave us 3,734 for integer and 3,440 for floating point. Whereas, the iPhone X score for the A11 was 4,630 and 3,958 for integer and floating point respectively.

In regards, to the Giga-Hertz Samsung came to a processor speed of 2.7 GHz, which is lower than the announced GHz in the last month event. Samsung claimed that the chip would clock at 2.9GHz though it is a mere 0.2 GHz difference. 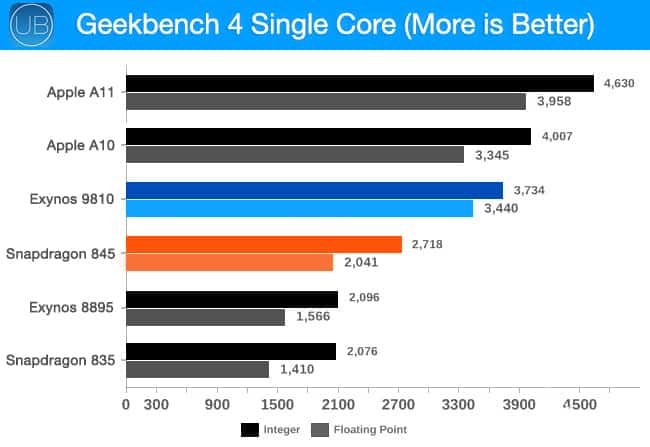 Now when we look at the Snapdragon 845, as they would be for the United States retail devices. The Geekbench 4 result was even poor than the Samsung’s Exynos 9810 chip. The single-core performance test result for the Snapdragon was 2,718 for integer and 2,041 for floating point.

Both the Samsung devices Galaxy S9 and Galaxy S9+ will hit the shelf next month, and it was supposed to be the ‘next best thing’ of 2018. But it came short when comparing it to the last year Apple’s iPhone A10 and A11 chips core performance. So in the CPU performance fight between the two Samsung Galaxy S9 vs. iPhone X, iPhone was the clear winner.

Let us know in the comments below are you going to by the Samsung Galaxy S9, Galaxy S9+ or will opt out for a Galaxy Note 8?