Recently, we showed you a few comparison images of the iPhone 4, the Samsung Galaxy S3 shot and the iPhone 5 dummy, which popped up everywhere on the internet.

Will the next-generation iPhone look like what we’ve heard in the rumors? This is a question that’ll be answered in 5 days on the September 12th keynote. 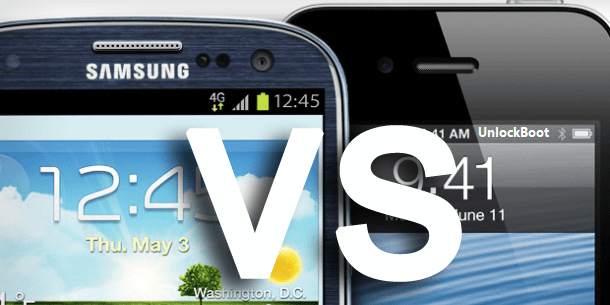 Samsung Galaxy S3 and iPhone 5 are facing in an interesting confrontation that forces users to argue and choose what is the best smartphone to buy. There are a lot of reviews online that are showing that the iPhone 5 has become a turning point for Apple’s, when the company can not show innovation, but only enhances the old developments. However, about the Samsung Galaxy S3 is also a lack of criticism on account of its design and the plastic casing. So, all the same kind of phone is the real winner? Find out now.

Samsung Galaxy S3 comes in 6 different colors, but it is heavier than the iPhone 5, at least there’s a little difference between the 112 gr. and 133 c. Then the iPhone attracts, but in the tech world is not so much.

Apple increased the iPhone 5 screen from 3.5 inches to four, which increased the resolution to 1136h640 pixels. But the Samsung Galaxy S3 has a huge 4.8-inch screen Super AMOLED. Both HD display and has an aspect ratio of 16: 9, so if you choose on the display and the size, the Galaxy S3 wins.

Samsung Galaxy S3 fortunate in that it can connect with any micro USB cable for charging. The iPhone 5 is set Lightning connector, which can charge the smartphone is very fast, but not suited to anything else, the iPad 4 and iPad Mini. iPhone 5 has not received MHL, wireless charging and NFC, while the S3 has it all. Because everything about the connection and interaction with other devices, the Galaxy S3 wins.

Conclusion: The conclusion should rather do each because decisive can be any item. Someone chooses a smartphone for himself only in appearance, but someone important flexibility and customization of the system. All this is very subjective comparison, as even in the benchmark from time to time can be quite different results, and you can play the numbers as you like. But today it looks more attractive Galaxy S3, even despite the fact that the iPhone 5 came much later, but whatever it was, his appearance was not announced, no innovation – just a small upgrade in hardware and OS. If you have your reasons, you can write arguments in the comments.

Will the iPhone 5 Put Samsung Galaxy S3 to shame? Tell us in the comments below!