While iPhone 5S was released back in 2013, it was the first ever smartphone to feature a 64-bit operating system. Ever since iPhones became capable of running 64-bit apps, Apple has always encouraged the developers to submit their apps in 64-bit. However, after the 2015 WWDC submitting all the developers’ apps in 64-bit became mandatory and an error called the 32-bit app error was initiated to warn all developers about submitting a 64-bit version of their apps. Now that the older iPhones are almost out of order and any further iOS update support, Apple reinstates the 32-bit app error alert. All the apps that are submitted to App Store should be 64-bit otherwise the submissions won’t be accepted.  when you try to install 32-bit apps you will get the “App May Slow Down your iPhone” error. 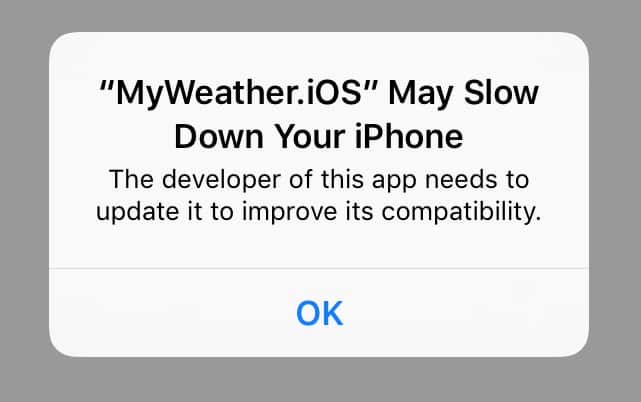 Ever since the iPhones became capable of running 64-bit applications, Apple had been inspiring the developers to create apps that can process in the 64-bit arena. However, since 2015 while iOS 10 developers’ preview testing period, the ‘This App May Slow Down your iPhone’ error message first started showing up. The intention was to warn the users of the potential delay a 32-bit app might cause on their iPhone or iPad. However, the message was only confined to the developer preview and when the final version of iOS 10 rolled out for every user, the message disappeared.

Later with iOS 10.1’s release, iOS had reinstated the same alert message with a more straightforward approach. The goal is to keep the iOS users away from downloading apps that are still running in 32-bit to keep the performance up to the promised mark. A 64-bit device could severely slow down if the apps installed in it doesn’t utilize the 64-bit capabilities to the fullest. After the ‘This App May Slow Down your iPhone’ error title, the error message continues like this ‘The developer of this app needs to update it to improve its compatibility’.

Why does this show up? Because the 32-bit apps for iOS platform are no longer optimized for the fullest utilization of the system. They run in a minimal configuration, disallowing the iPhone to speed up even when the phone is fully capable of it. All the current iPhones now make 64-bit apps a mandatory requirement, but pretty soon Apple might just pull the plug and 32-bit apps will no longer run on iOS platform. Developers who are still developing and updating their apps in 32-bit should think about moving on to 64-bit really soon.

A lot of legacy apps are about to be obsolete if they don’t update to a 64-bit version anytime soon. The developers were asked to submit a 64-bit version of their apps in the Apple App Store by February 2017. A lot of them have complied with the order, while a lot of others didn’t.

Removing the 32-bit apps from the App Store would be a major change in the way iOS operates. Although full compliance from the developers’ side may take some time, yet it’s going to be pleasant once the transformation phase is over.