If you own both a Galaxy Note 9 and an iPhone XS Max, which of them do you regard as stronger? Well, if you’re looking for a real-world answer, check out PhoneBuff’s YouTube channel. The content creator has taken both these high-end devices through a series of drop tests, trying to smash their externals to smithereens. 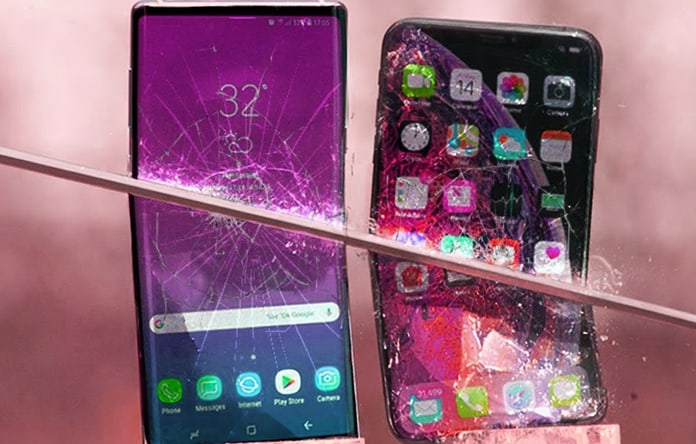 Apart from waiting to test out new features like Siri and camera on these devices, it seems that people are highly interested in seeing how iPhone XS Max and Galaxy Note 9 fair against each other when submerged in deep water or dropped from varying heights.

This is more likely a mixture of entertainment value and morbid interest in watching expensive handsets being description, than actually attempting to ascertain if the new handset would break into pieces when dropped from a high rise building. That said, it might be an indication for some as to whether to buy the device or not.

PhoneBuff is always willing to do tests for this kind of a crowd. He found out the strength of both iPhone XS Max and Galaxy Note 9.

For those interested in the outcome and aren’t too fascinated to hear about the journey to the final outcome, it looks as if the iPhone XS Max is made to last any single drop but could break if it’s taken through multiple drops.

In fact, it is not indestructible by any sense of imagination (it’s covered in glass after all), but it better performs in drop tests than the Note 9. In fact, the Note 9 didn’t stay in one piece in the initial test, with the device’s back shattering as soon as it hit the ground.

However, in the final round of testing, which featured both devices being dropped from varying heights 10x times, the iPhone XS Max stopped working just in three drops. Samsung’s Note 9 Galaxy was still working after ten drops, and was classified as a functioning handset.

At the end of it all, PhoneBuff gave one more point to the Galaxy Note 9 than the iPhone XS Max.

All quite interesting, but the tests make one thing clear: manufacturers make their devices for aesthetic appeal and different features that make people’s lives easier, not to be taken through a series of drop tests.