You might be familiar with the news that European carriers were piling 40 percent Nano SIMs ahead of the iPhone 5 unveiling which is being expected on September 12th. 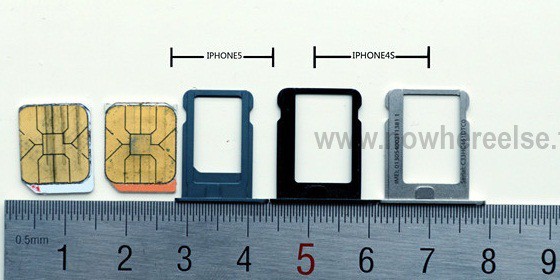 They also tested the new SIM card standard ahead of this release. We bring you the latest series of images, posted on a French blog this morning, depicting the Nano SIM tray for the new iPhone.

Another leak shows a home button which looks like it has been reworked and also appears smaller. Here is the story from French blog NowhereElse.fr:

Presented as being designed to slip into the SIM card slot of the iPhone 5, this element seems in turn confirm that the next iPhone indeed adopt this new standard imposed by Apple.

Apple’s Nano SIM proposal was picked as an industry standard in June by The European Telecommunications Standards Institute.

It has also been informed by the site that all large orders have been placed for Nano SIMs by all major French telcos ahead of the release on September 21st. The site has got a hold of these images somewhere from China. Apple is thought to be making efforts for a smaller SIM card because the space is small inside the upcoming iPhone and engineers needed more space to put some additional components.

There are also images posted that show a smaller home button. Check it out

By looking at all of this information, looks like iPhone 5 can possibly arrive with a Nano SIM card. There are so many leaks going on. What will Apple show on its media event when we have already seen so much? Share your thoughts in the comments section below!

Learn How to Turn Off Caller ID On iPhone