Samsung launched its two new Galaxy Note phones this year: the Note 20 and the Galaxy Note 20 Ultra 5G. These new and luxurious phablets are aimed at phone enthusiasts who are ready to go to the next level. Anyone who wants a high-tech phone with the S Pen, the powerful Snapdragon 865 Plus, and a triple-lens camera module is welcome to join the league. 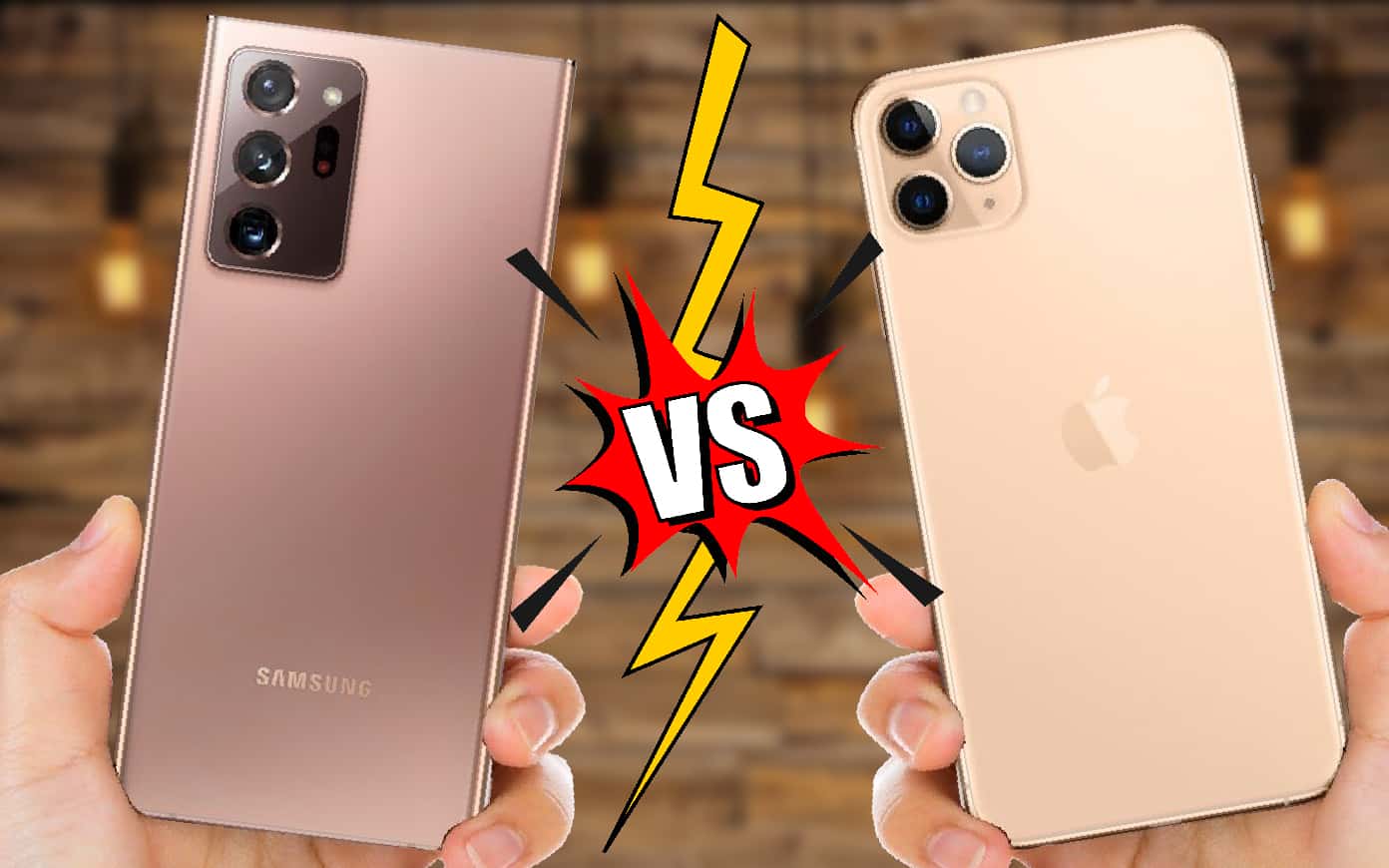 Samsung is not the only one offering a big-sized device which has ‘got it all’. The iPhone of this year is the iPhone 11 Pro Max, and it is Apple’s newly launched beast in the market. An engineering masterpiece with its gorgeous design, vivid display, and awesome power, you can rest assured that it is one of the best phones. Both of these devices start above the $1,000 mark, so one cannot own both. So which one should you buy and why? We found out in this review.

The Galaxy Note 20 Ultra 5G is a beautiful phone, especially when you pick the Mystic Bronze color. The giant 6.9-inch AMOLED display stretches from end to end with no distraction of bezel. Even the front camera is neatly hidden so you can’t even tell. The edges are curvy, and S Pen’s dock is moved to make using the phone more ergonomic.

iPhone has its own different approach when it comes to phone design. The device is slim bezel-ed, but the notch at the top of it’s screen is more noticeable than Note 20 Ultra 5G. It’s not a bad looking device at all, though, because the new matte texture on the back feels and looks great.

Both phones have OLED display which is another word for a big screen phone with wonderful display. The Note 20 Ultra’s display is crisp and sharp, but you might have to pit both of the screens together to actually feel the difference. The Galaxy Note 20 Ultra refreshes at 120Hz, which means it will refresh twice as often as the iPhone with its 60Hz display. It means that the Galaxy Note is more responsive and looks sharp.

When talking about durability, there’s not much that differentiates the two devices. Both phones have an IP68 rating and are

Both of these phones look gorgeous and feel luxurious to hold, but it’s the 120Hz display of the Note 20 Ultra 5G that the iPhone just can’t match.

Both of these phones are high-powered, so rest assured that you will get a powerful device no matter what you choose. The Galaxy Note 20 Ultra 5G is powered by the Qualcomm Snapdragon 865 Plus, and frequent users will notice the smooth switch between apps and performing quick functions, 3D games, or anything you use the phone for. The A13 Bionic processor on the iPhone 11 Pro Max is quite the same, and though the A13 tends gets higher numbers in benchmarks, it might not translate to a tangible difference in real life. You are telling the same story where RAM is concerned— as iOS uses RAM in a different way from Android, the big difference between these two will not affect as much as it can.

The Note 20 Ultra 5G contains the bigger battery of these two competitors, and we think that it was able to bear the brunt of some heavy use but still work well from morning till night. However, we are up against Apple’s monster. The iPhone 11 Pro Max shows amazing longevity in our usage review, and it’s not difficult to see the device going for at least two days with normal use. The Note 20 Ultra is faster in terms of charging and Wireless Powershare that charges other devices, but it’s apparent that batteries that need to be charged less offer more convenience.

Every time a flagship phone enters the market, it will generally enter with some camera improvements, and these phones are no different. The Galaxy Note 20 Ultra has a triple-lens rear module, with an ultrawide angle lens of 12MP and a telephoto lens of the same ratio. You will also get a 10MP selfie camera on the front, too. The camera software is also top-tier that makes photos stand out. You can take great photos in rich colors with your Note 20 Ultra 5G.

Apple’s new iPhone can only be overtaken by the Huawei P40 Pro which was the winner of our best camera phones list until the release of the new Chinese flagship. Needless to say, the three 12MP lenses in the iPhone 11 Pro Max take some lovely still images and professional-styled video. Which one is better out of the two? We’re bent towards the iPhone for taking the better photos, but you also got a lot to love about the saturated images the Note creates. We think this is a tie.

The Android vs iOS debate is more about a person’s taste than the phones. These are two operating systems with their upsides and downsides, and you might already know or have a specific device in mind that you prefer. On the plus side, barriers in functionality and specs between the two devices have fallen over the years (this year ends with the addition of widgets in iOS 14), so choosing between these two isn’t a big change but a mere overlap. You must note here that Samsung uses its own manufacturer skin on each Android device, One UI 2. It gives the user a variety of additional customization options to stock Android, but it’s not one of our favorite skins by any means.

It is a good thing to have your own manufacturer’s skin, but One UI 2 is probably why updates take a lot of time on Samsung phones. Samsung is famous for taking up to 6 months to hand over the latest versions of Android — something you won’t experience when shifting to iPhone. Apple pushes out updates to its phones on the same day of release.

The iPhone 11 Pro Max is a phone bursting with unique features. The first to mention is Face ID, Apple’s native phone unlocking method that scans your face to use it to unlock your phone. The same feature is used in Memoji and Animoji that allow you to make a cartoon version of yourself or an animal head. Both characters are designed to copy your head movements. iOS 13 came out with a dark mode which you can apply to every major application and customize.

The iPhone battles against a Galaxy Note here, a phone famous for its special features. In this device, you will get all the features you’d expect from a flagship Samsung phone. This includes Bixby, Dex desktop mode, and 5G — and the S Pen. This little stylus called S Pen can control your phone as a remote or with air gestures, can scribble notes for you on the phone’s display, and gives more control that a user can’t get with a finger. The Note stands out with the debut of the S Pen.

The iPhone 11 Pro Max is currently being sold at stores and carrier outlets around the US, and prices begin at $1,100. Prices for the Galaxy Note 20 Ultra 5G start at an eye-watering $1,299, and you can easily find it as most major shops around the US.

The comparison between Apple and Samsung is just as sharp, and this time Samsung’s Galaxy Note is the winner. Galaxy Note 20 Ultra 5G is undoubtedly a modern masterpiece with its razor-sharp processor, great camera, and solid battery life. Samsung’s newest phablet model is the winner here. compared to the two phones, it is certainly the better one.

However, this is a review of both devices based on their structure and functionality. If you’d prefer to keep an iPhone, then consider buying the iPhone 11 Pro Max. It is also an amazing device, and you will not regret your choice. But if the S Pen seems like a great idea, buy the Samsung Galaxy Note 20 Ultra 5G.