There is a vast gap between Apple devices and OnePlus devices. Apple always strives to add something new and innovative to their smartphone to dominate the market. However, the only major differences we can see between an iPhone 7 Plus and OnePlus 5 is the price, where iPhone cost 2x times more than any flagship Android smartphone. In this post, we will show you a review about OnePlus 5 vs iPhone 7 Plus. 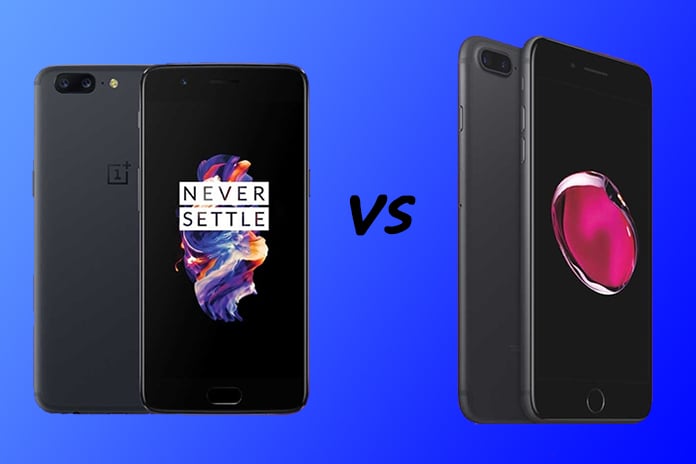 OnePlus is a brand, which risen to the top in a matter of years and they were able to grab the attention of the buyers through their cutting-edge features and high-end performance smartphone. To challenge the Android market throne, OnePlus has released their priciest smartphone OnePlus 5 in the leading countries, which is expensive, selling at a fair price.

OnePlus 5 vs iPhone 7 Plus Comparison

Let’s begin with the quick price comparison, where iPhone 7 Plus is a third revision version of iPhone 6. iPhone 7 Plus comes with dual camera, which happens to be the selling point. An iPhone 7 Plus price starts from $700+, which is beyond a common man’s reach.

While OnePlus five is powered by Android, and the price is 50% lower than the iPhone 7 Plus. The priciest smartphone from OnePlus is better than a standard model, which isn’t that expensive if you are going for an high-end smartphone.

Result: OnePlus 5 is a clear Winner when it comes to price. 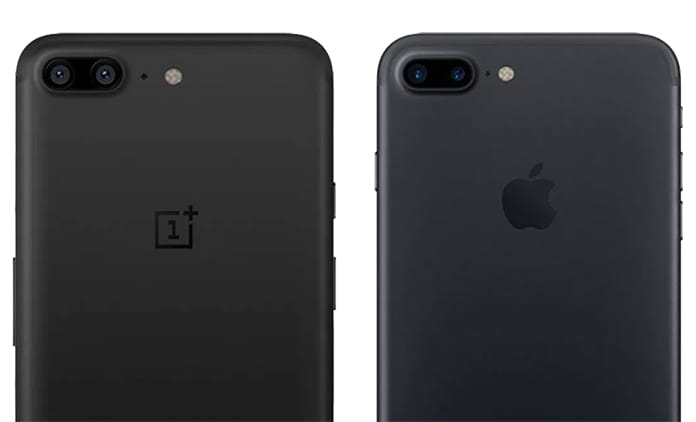 Apple is focusing on marketing the iPhone 7 Plus over iPhone 7 because of the Dual Camera, which shoots better snaps in different light conditions. The quality of the pictures and the zooming tricks will help snap better photos on a daily basis.

In OnePlus 5, the manufacturers wanted to dominate the iPhone 7 Plus capabilities, which they were unsuccessful at it because they had to deliver within a price bracket.

The OnePlus have replicated the rear design of the iPhone. When you place the two smartphones side-by-side, you can notice it. However, OnePlus is not known for camera performance but it does a decent job for a high-end Android smartphone.

iPhone 7 Plus equipped with dual camera, which is horizontally arranged, which is similar to the OnePlus 5. The camera of both smartphones includes a Telephoto and Wide angle lens. The iPhone 7 Plus packed with two stunning 12MP rear cameras with 7MP front-facing camera. The iPhone 7 Plus comes with 4k Video shooting capabilities, OIS, and Quad LED flash.

The OnePlus 5 equipped with Dual Camera with a Quad LED true tone flash, and it comes with wide-angle of 16MP + 20Mp telephoto lens rear camera, which offers 4k video recording capabilities. The detailing may not shine like the one on iPhone, but it still does a fair job because Sony manufactures the Camera & the Lens. If you are a selfie-addict, then OnePlus has a 16MP front facing shooter.

Result: We cannot compare the Camera capabilities due to the pricing. However, performance does add great value to any buyer. OnePlus 5 delivers a smart camera at this price range, and such an incredible run will be closed with a draw. 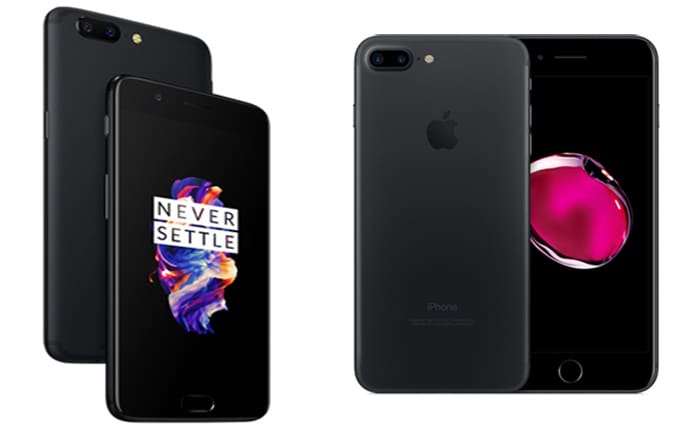 As conventional, the rear design is replicated as well. The curves are rounded up on the edges, while the antenna lines are covered with a hard metal coating, the logo is in the middle with a true tone flash, and an additional mic.

iPhone 7 Plus has put an end to the 3.5mm jack, while you can add a regular headset to OnePlus 5. It does feel elegant, durable and rich in your palms but iPhone has much more premium look and feels to it.

It took a while for Apple to add adhesive to make their smartphones Water-resistant, and on the other hand, OnePlus 5 has missed joining the likes of Apple, and Samsung.

Result: We are calling it a Draw. 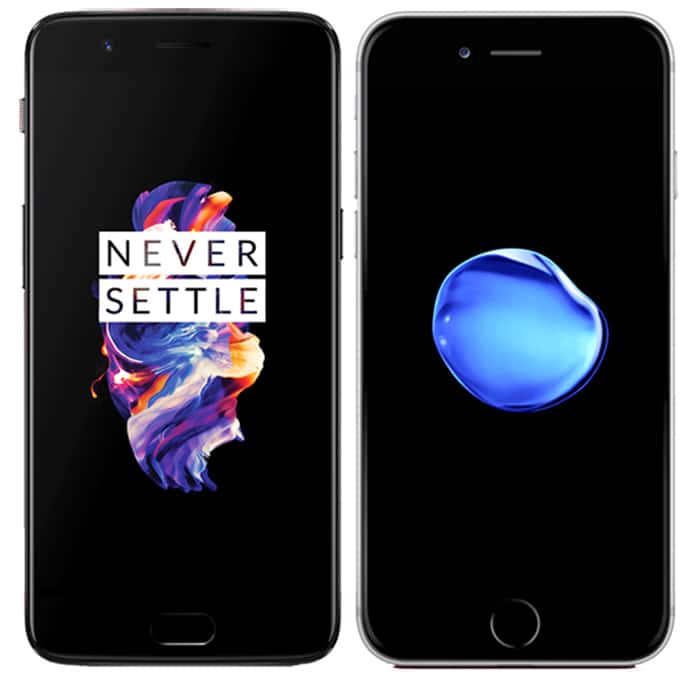 Finally, OnePlus has packed one unique feature, which can beat the traditional Display of an iPhone. iPhone has bundled the 7 Plus with a 5.5inches/1080P LCD screen, while Oneplus is a step ahead with a stunning 5.5inches/1080P AMOLED display, which guarantees the Clarity, Contrast, and Brightness. OnePlus has an edge here with the details the smartphone can view slightly close to the Apple flagship device.

However, the 401ppi (pixels per inch) screens provide excellent brightness, contrast and clarity. But there is one main difference: the iPhone uses an LCD, while the OnePlus 5 goes for AMOLED, which means incredible contrast that help photos and other media shine.

There are no fundamental differences when you compare the Pixel per inches as they both cover 401ppi. It goes without saying that the OnePlus can deliver much detailing, and gaming visuals will be superior to the Apple flagship.

4. Performance – OnePlus 5 vs Apple iPhone 7 Plus

Apple devices run on iOS, while OnePlus 5 runs on Android OS. Currently, these are the rivals and the leading OS in the world. Even in the Android world, iOS is well-respected because of the power pack competition it put on the table.

Apple specialty is to build their Hardware & Software, and the fusion of both series is an iPhone. iPhone 7 Plus is powered by A10 Fusion chip (Octa-core = 8 Cores) with 3GB RAM. The gaming is top notch, and it opens Apps, Games, Inbuilt features smoothly without any lag.

OnePlus 5 is powered by (Processor Manufacturer) SnapDragon 835 with 6GB RAM, which is insane. If you are an Android geek, then you can throw few more bucks to obtain 8GB RAM model, which can deliver power pack performance. The OnePlus 5 runs on Android Nougat 7.0, and it comes two Android significant software updates.

Results: You can perform a test on Single-core and Multi-core but OnePlus 5 wins because iPhone 7 Plus is more likely to slow down after a couple of years, and it lacks RAM as well. While OnePlus will get two major updates, and with 6GB RAM it will be able to compete with top-tier smartphones.

Storage – OnePlus 5 vs iPhone 7 Plus

Apple Storage: Apple does not come with an expandable storage slot, to ensure that you won’t feel frustrated, iPhones are launched in various variants, offering 16GB, 32GB, 64GB, 128GB, and 264GB. Of course, you have to invest more money for higher storage capacity iPhone.

OnePlus: Fortunately, the OnePlus storage start with the 64GB variant, if you can afford $150 extra then you can get twice of the storage along with 2GB more RAM. It won’t make much difference in the performance, but it does offer you a cheaper storage expansion. 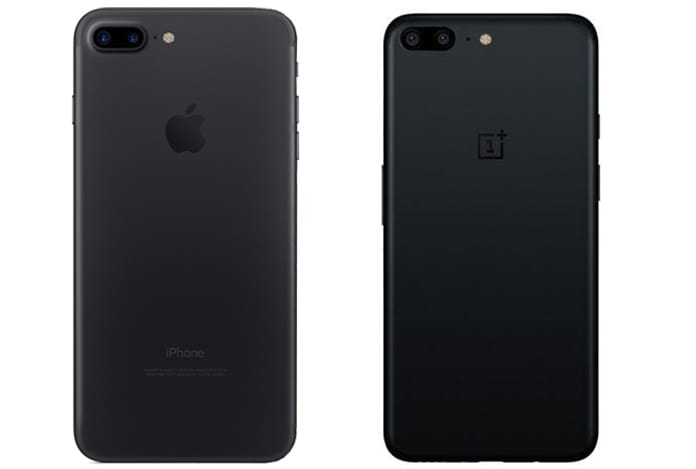 The both smartphones can last for a day, but OnePlus 5 was able to last longer than the iPhone 7 Plus.

Price Range – OnePlus 5 vs iPhone 7 Plus

Interesting, OnePlus 5 is much more affordable than the iPhone 7 Plus and here are the prices.

There are so many factors involved in iPhone 7 Plus vs OnePlus 5 comparison, and we have discussed few important points, which every consumer is confused to choose between both smartphones. Shoot your opinions and experience in the comment section below.