Videos have changed a long time people. Regular rectangular sized videos don’t really lure people much since the inauguration of digital photographs have happened. Smartphones have had panoramic photo capturing options almost since the very beginning, but that didn’t really come out totally successful until a very recent stage. Even now, with the smartest handset out there, a panorama will get scrambled if the subject in it moves. The real fun of having wide panoramic or 360 degree videos in capturing it all at once; and that could be done using a special lens designed only for 360 degree photo purpose. EyeSee360 makes a special type of lens attachment for iPhones to capture 360 degree videos at once. 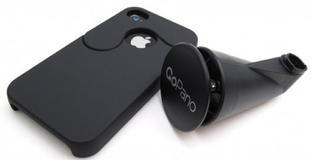 EyeSee360 is Pittsburgh, PA based company that started off as a Kickstarter startup back in 1998 and been making 360 degree photographic products ever since. EyeSee360 happens to be the leader in making such technologies for both still and moving pictures. Apart from making camera lens attachments for phones and smartphones lately, the company also specializes in making robotic vision, image rendering and interfacing software programs for all these mentioned. Previously the company was only military technology centric and now they have moved to consumer based product market as well.

Two products from EyeSee360 are circulating in the market with a view of allowing the iPhones users capture 360 degree videos in one snap by using the lenses as external attachments on the existing smartphone camera. No modification is required on the phone or any software, just snapping the lens on the phone is all it takes. The products are GoPano Micro and GoPano Plus.

Videos in round shape look funny, but why stop just there? That’s what the EyeSee360 people had in mind and they created the GoPano Micro. It’s a snap-on lens which takes 360 videos by using some mirror reflection techniques inside the tiny barrel. The dimension of the lens is conic, not very tiny of course but it gets the job done. The looks on the conic lens might look weird but the fun in shooting 360 degree videos and videos are something that should not be missed. There are usually three stuff in the packaging – a plastic case for your iPhone, the snap-on detachable 360 degree lens and GoPano app for easier capturing of videos in desired angles.

GoPano Plus is another product created for attachment with point and shoot or digital SLR cameras. Not really built for iPhones or any other smartphones, yet the GoPano Plus has received immense popularity with people who can’t spend money for very expensive wide angle lenses. The EyeSee Go Pano Plus Panoramic camera mount comes with Photowarp 2.5 Software for better post processing of the pictures the user takes with their camera. Video panoramas could be created as well, it’s a Mac only feature though.

Conclusion: 360 degree videos have been made easy with GoPano products, by EyeSee360. Both the stock iPhone camera app and GoPano app could be used, for the perfect output we would recommend using the GoPano app.