This post compares the new Galaxy Watch from Samsung with Apple Watch Series 3 for value, specs, features, design and more. Which of the two should you spend money on? Let’s take a look. 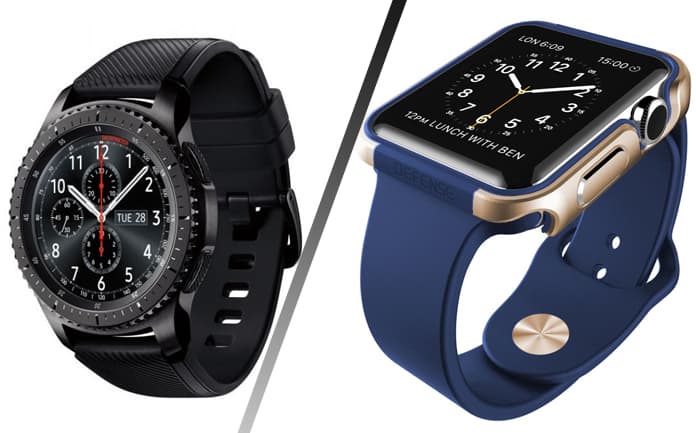 Apple Watch Recommended Retail Price (RRP) – Pricing begins at $329 for the GPS version and $399 for the GPS + cellular version with Sport Band for the 38mm aluminum case one. It goes up to $1,399 for the one with Hermès Deployment Buckle and a case that’s made of stainless steel.

Apple has dominated the smartwatch industry ever since it seeded the first Apple Watch in back in 2015. Several new wearable vendors have tried to gain market share, but haven’t been able to eat into Apple Watch’s pie so far. Can the Samsung Galaxy Watch do what others couldn’t? The revamped success of the Gear S3, introduced alongside Galaxy Note 9, provides far superior battery life than the Apple Watch and offers a range of health benefits and features.

Let’s compare the two’s features, specs, design and value for money to find out.

Apple Watch series 3 was launched in 2017 (autumn) and is available for $329. However, this pricing would get you just the basic GPS version. You’d have to shell out $399 if you want to get GPS + cellular. Additionally, there’s a larger, costlier model available. It costs $1,399 and includes a range of luxury materials and straps. You can buy it from Apple directly or contact us for a deal.

The Galaxy Watch’s Bluetooth version will come out on September 7 but you can pre-order it now as well. If you do, Samsung will put in a “Wireless Charger Duo” that enables you to change a Samsung handset and the Galaxy Watch together. For the LTE model, there’s no schedule date of launch but it can arrive in 2018.

Consumers have to shell out GBP279 for the 42 mm model and GBP299 for the model that’s 46mm if they purchase directly from Samsung. In the United States, the starter model retails for $329.99. The Bluetooth model will also be available in stock at EE’s for GBP329. The pricing for the LTE model is not yet publicly announced, but we expect it to cost GBP100 more than the Bluetooth model.

Smart readers will immediately see the difference in design philosophy in the two branded watches. Samsung went for a circular screen, while Apple went for a rectangular one.

The approach taken by Samsung gives off a more classic look, and many buyers prefer that. However, Apple went for the favorite Shape that Steve Jobs made famous – the rounded-corner rectangle. This shape displays the text really well.

Samsung is endorsing its military-grade durability of the watch, featuring the advanced screen protection (Corning Gorilla Glass DX+). However, the Apple Watch too is tough; the more expensive models are manufactured using Iox-X glass while others utilize sapphire crystals.

The body of the Apple Watch comes in 8 material/color combinations: Space Grey, gold, Rose Gold or white aluminum; dark grey or white ceramic; and black stainless steel or stainless steel. In addition, you can choose from a big variety of materials, designs and colors.

And here are high-quality shots of the Samsung Galaxy Watch: 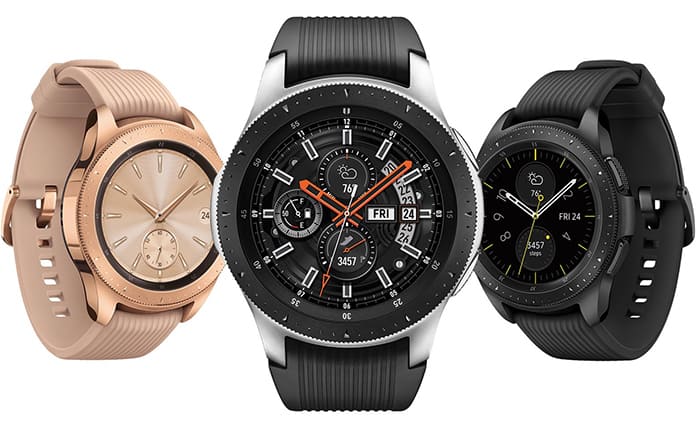 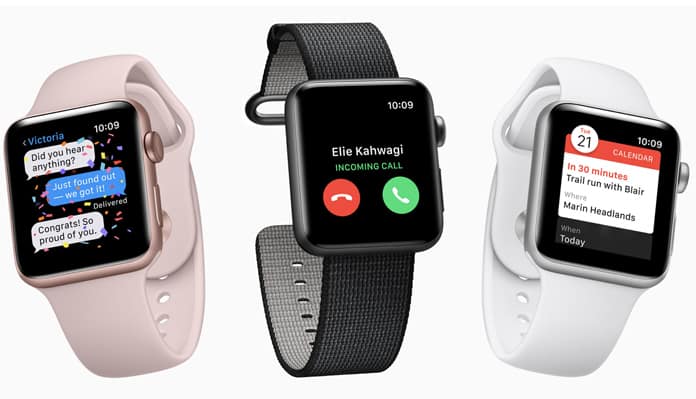 We’ll provide you with the complete tech specs in a bit, but first we’ll see the features of each device.

The Apple Watch includes Apple Pay, which allows users to pay in retail outlets without needing a wallet. They don’t even have to take out their smartphone from their pocket. The Galaxy Watch features Samsung Pay. Several banks have signed up to allow its usage, but some names are excluded.

Apple Watch Series 3 also offers 2x to 4x more storage space than its rival, depending on the version you select, although smart watches don’t have a dire need for storing files. One of the few things the storage can be handy for is music for outdoor runs. Apple’s version is also lighter than its rival.

The Galaxy Watch’s screen is always-on. Apple Watch switches off to save battery, and wakes up when a user rotates his/her wrist. Apple’s watch claims just 18 hours, and if if it’s a non-cellular model, it can last up to 2 days.

An important aspect of the battery comparison that you might overlook is that Samsung Galaxy Watch’s sleep companion is far superior. There’s less requirement to charge it during nighttime. In fact, it is designed to monitor the user’s stress levels, as well as their sleep cycles. And like the Apple Watch, there’s a guided-breathing relaxation function on offer.

Both Apple Watch Series 3 and Galaxy Watch are water-resistant and can survive in a swimming pool, which is beneficial for swimming enthusiasts. The first model of Apple Watch didn’t have such credentials, and was labeled ass suitable for using in shower but not using underwater. Since then, Apple Watch has arrived with upgraded hardware and software, because of which it can be used in a variety of swimming workouts.

Both watches have voice assistants as well. Samsung comes with Bixby, while Apple has Siri. Both aren’t world-class.

Lastly, the Galaxy Watch is compatible with any phone using Android 5.0 or above, or with an iPhone 5 or above with iOS 9.0 or above. The Apple Watch just functions with iPhones.

watchOS is present on the Apple Watch. By default, watchOS 4 is going to be pre-installed if you purchase right now, with an option to install watchOS5 when it is released in autumn. watchOS is quite user-friendly with several pre-installed applications; most being fitness apps. That said, you’d find several useful third-party apps as well.

In contrast, the Samsung Watch comes with Tizen, Samsung’s own OS. Tizen is also user-friendly (comes with circular menus that the user controls via bezel rotation) and excellent fitness apps. However, the third-party app offering isn’t as versatile as Apple’s.

The Apple Watch Series 3 is a fantastic smartwatch that truly deserves acclaim in the wearables space. We suggest buying the GPS variant, since the cellular model is expensive and consumes more battery. It looks sleek, has a variety of third-party apps and after a few months will host a new OS. The Galaxy Watch doesn’t have an extensive range of third-party apps, so we consider it a simpler offering; more of a FitBit than a full-mature smartwatch that has peaked in its prime. But it’s great if you’re looking for a cost-friendly option that comes with robust sleep tracking and better battery life. In the end, the decision is yours to take.