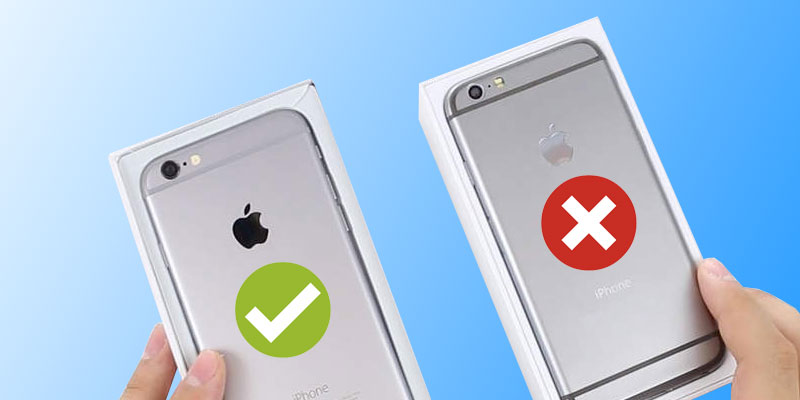 Being an Apple iPhone owner is all about being proud of your purchase; because each apple user doesn’t only pay for the phone, they pay for the quality, the iOS and the status that apple has garnered since its inception. So if you buy an iPhone and later find out it’s fake, wouldn’t you be bummed?

Well, noticing that because of the fame and users not inquiring about the fake iPhone, Smartphones manufacturers are creating an exact copy of the iPhone. The duplicates are so well made that no one can differentiate between the real and fake unless inspecting it closely.

To help a future owner of an Apple iPhone or if you want to know whether your iPhone is real or fake, read our following guide, how to know if the iPhone is original or duplicate. This guide will not only save you from embarrassing yourself but will also save you thousands of dollar.

How to know if my Apple iPhone is Genuine or a Replica?

Typically a buyer while purchasing an Apple product or an iPhone pays attention to the phone’s aesthetics and design. While he would dismiss all of the other important factors that will aid him to find the original iPhone from replica; and accepts that the iPhone is original and certified. 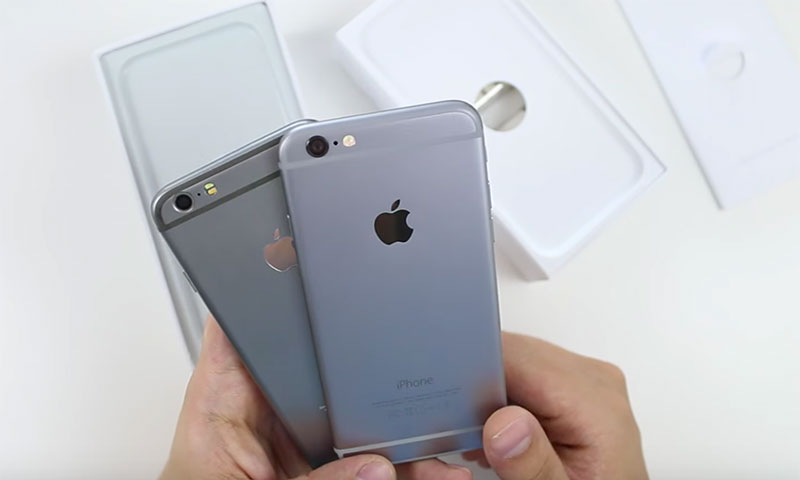 Currently, an iPhone retails at $749, but people are misled and buy the fake iPhone for the low price of $349. Hence ‘when it seems too good to be true’ it’s actually not.

Please see the following steps to spot a genuine iPhone from a replica:

Word of advice before you go through the guide, we suggest you to buy Apple products from an authorized apple seller, trusted sites and Apple store and avoid local stores that gives a good deal on the iPhone.

How to Verify if your Apple iPhone is Original or Fake?

The iPhone we are using for this guide is a brand new iPhone 6 and the copy of the iPhone 6.

#1: See the Box of the iPhone to Identify if it’s Fake or Original

Identify whether your new Apple iPhone is real or a replica by beginning with the box. 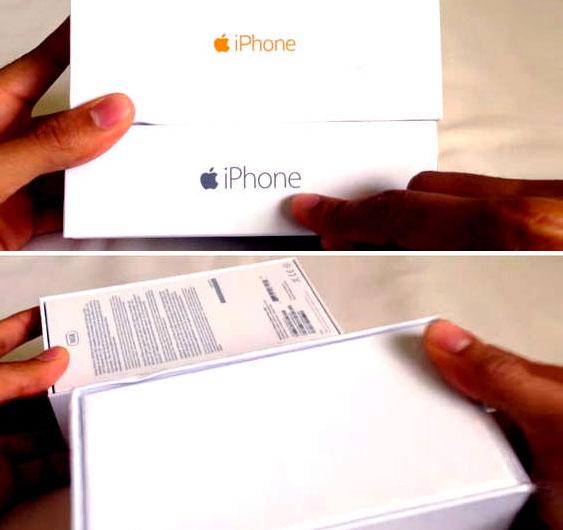 The initial and foremost difference to look for the original and duplicate iPhone is its packaging, the box.

The images show two boxes they are pretty similar in the build and the quality but the sizes of the box don’t add up. The fake box is slightly larger than the compact real box.

Here’s is the sure major difference between the two is that Apple prints a Dark Blackish-Grey logo on its packaging, whereas the replica box has an orange color printed on the box.

Let’s move to the next step when we opened the box we saw discrepancies between the two boxes, which is difficult for laymen to spot.

#2: Inside the Box of the Fake and Original iPhone 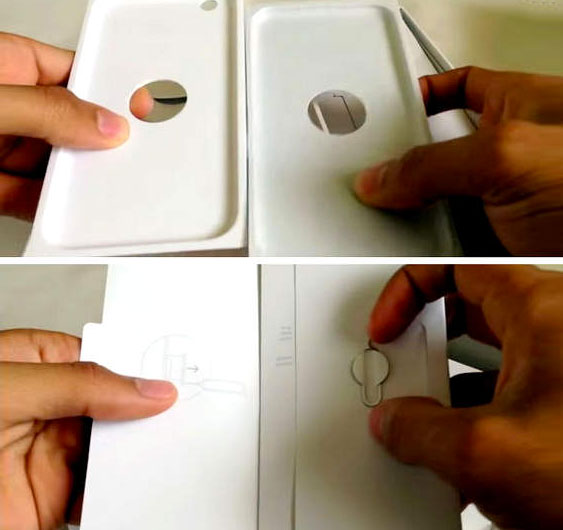 So here are the differences inside the box.

The biggest difference between the original and the duplicate is:

Moving forward to the accessories.

#3: Accessories delivered with the Original iPhone and Replica iPhone

Figure out if your Apple iPhone is real or duplicate, by looking at the accessories of the iPhone.

The accessories that we get with the product are the earphones, the charger, and the USB cable. The latter two are pretty same but to find the difference between the earphones, they both look identical, is to use them and listen to the quality of the sound. 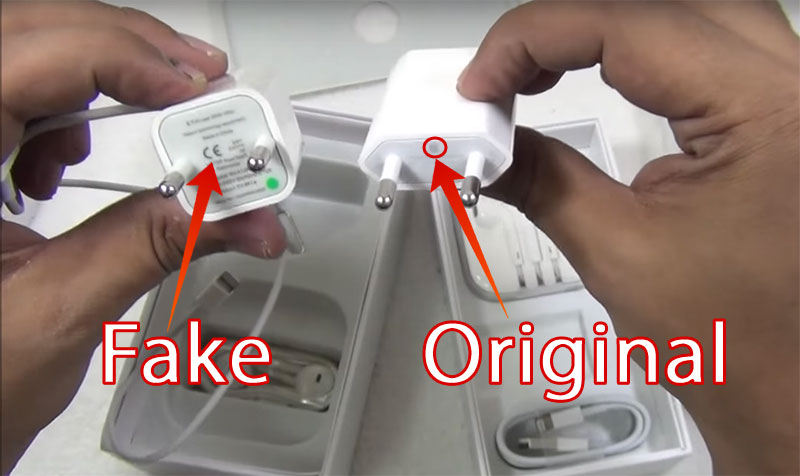 Now let us put the box aside and go to the devices itself.

How to figure out if your real Apple iPhone is genuine or fake by using the iPhone is by; the easiest and the assurance step is to look at the back of the devices.

Difference between Genuine Apple iPhone and the Fake iPhone 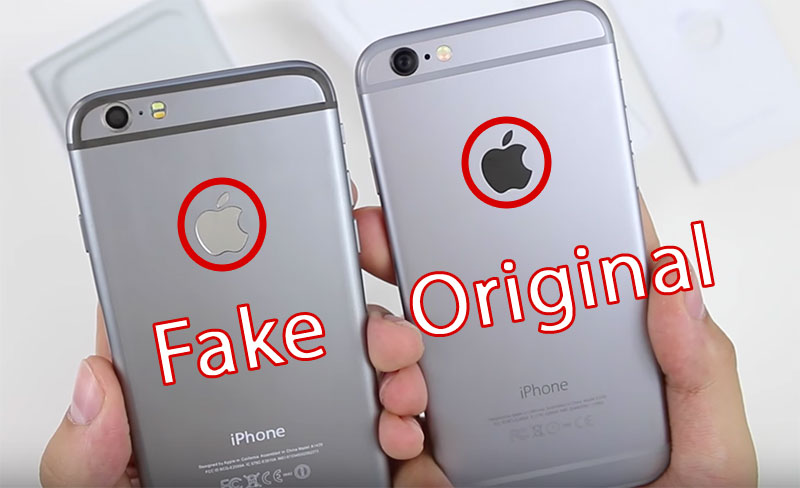 The other way to find the difference that actually verifies which one is real and which is fake (clone). The trademark and text written on the back of a genuine iPhone would always be at the most bottom near to the lining. The fake iPhone trademark and text would be slightly higher than the original.

Another factor to consider is the plating on the back, the original will have an ash grey whereas its counterpart will have a shiny silver platting.

Next are the camera alterations between the real and fake iPhone. 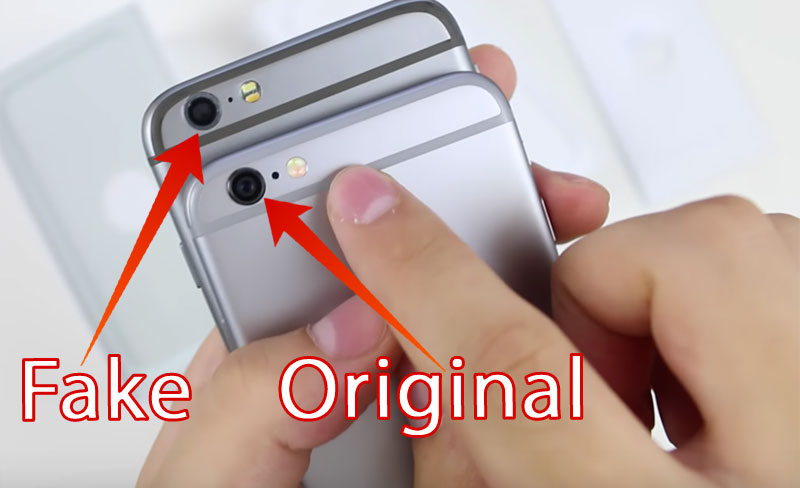 Secondly, the original iPhone will have a lighter yellow and broaden flash compared to the bright yellow and narrow flash of the duplicate iPhone.

Moving forward to spotting changes between the aesthetics, design quality and the buttons.

#5: Aesthetics, design quality and the buttons difference in original and duplicate Apple iPhone

If you look at the original iPhone its mm thickness is sleeker and thinner against the duplicate iPhone. In order to spot this difference, you need to look very closely.

The other difference are the volume buttons, they both look the same but the original iPhone are softer when pressing whereas, you need a little bit force to push the volume button of the duplicate iPhone as they are much harder.

When using the original iPhone the keys make a sound when tapping compare it to the duplicate ones they don’t make any noise.

We have compared the back side now let us look at the front.

When you start your phone or push the power button the iPhone display slide to unlock screen. The main difference between the two is that the original iPhone has the text ‘slide to unlock’ animated whereas the duplicate iPhone has no animation. 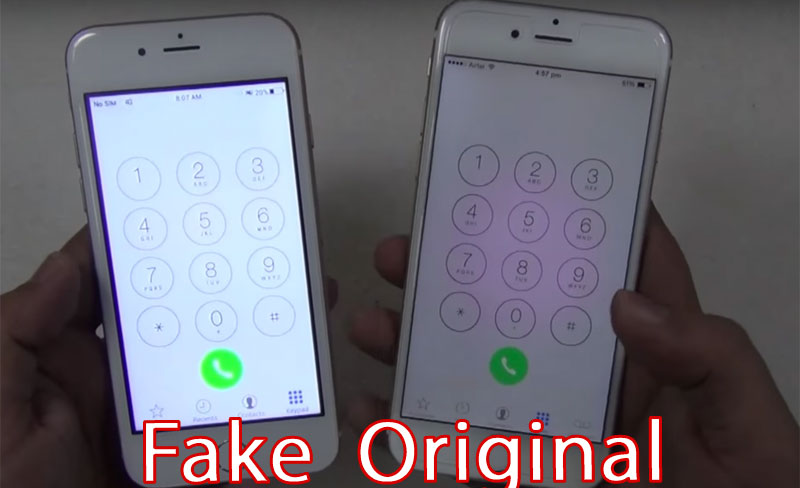 Secondly if observe closely, you can actually notice that the camera icons are slightly changed between the two. The real iPhone has much more of a defined icon, you can clearly tell it’s a camera, unlike the fake Chinese iPhone which is blurred and distorted.

Finally, we moved towards the iOS.

#7: iOS Software Differences Between the Genuine iPhone and Replica iPhone

Now, slide your finger up from the bottom to open the menu tray, you will see the other difference. In the original iPhone, the menu tray will a text ‘Airdrop’ different from the duplicate iPhone which a Text ‘Airdrop and Chinese symbols next to it’.

Another very important software difference between the original and the fake iPhone is that if you open the App Store app on the fake iPhone, it will open a Google Play instead of App Store. This means that this is a fake iPhone and mostly the fake iPhones are running a modified Android version.

These are the so steps and guides that can help anyone to figure out if there Apple iPhone 7 Plus, 7, 6s Plus, iPhone 6s, iPhone 6 Plus, iPhone 6, iPhone 5, iPhone 5s, iPhone 5c is original or duplicate.