Below is a guide on how to unlock Huawei P20, P20 Lite and P20 Pro with unlock code from UnlockBoot. After you do so, the device will work on any GSM carrier worldwide. In this article, we’ll explain everything that you need to know to make Huawei P20 SIM Free, i.e. unlock it to work on any global carrier network. We’ll also explain where to by the unlock code from, what are the steps needed and what instruction a Huawei P20 owner needs to follow for inserting the unlock code into his/her phone. 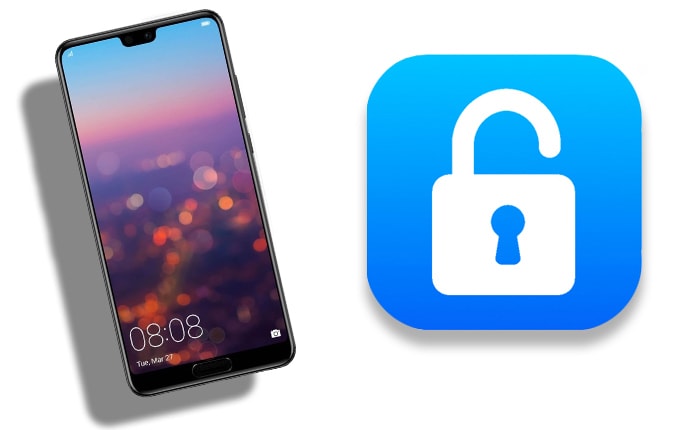 There’s no need to worry as the whole process is straightforward and simple. It just takes a few minutes to complete and the user doesn’t have the need to have any technical knowledge to get the job done.

Before we explain the step by step process to unlock Huawei P20 smartphone, we’d like to share with you a bit of detail about this device.

According to the reports out there, Huawei P20 is by far one of the most unique Android handsets introduced in 2018. Huawei has held the fingerprint scanner (best-in-class) at the front, in an oval shape at the screen’s bottom. Glass curved edges bend seamlessly at the sides’ polished metal bands while the camera module shows at the back (like on the iPhone X). 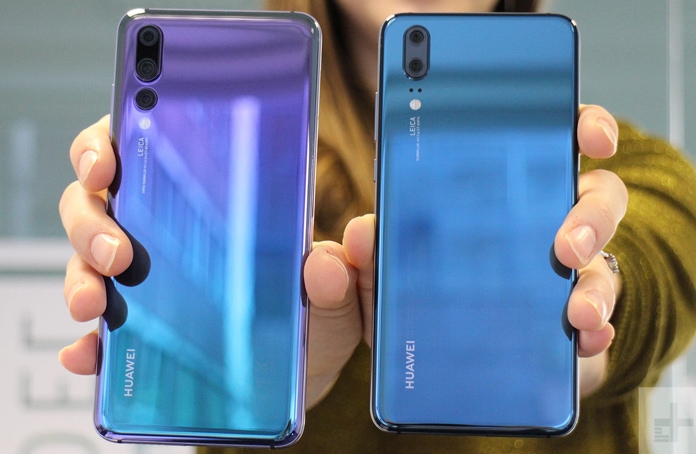 It’s one of the first devices to have 3 cameras on the back, rather than two or 1, which allows for a multi-layered photographic experience. The main camera is a color camera with an f1.8 lens and 40-megapixel power, while the other cameras are 20-megapixel with f1.6 lens and 8 megapixels with f2.4 lens (telephoto). These excellent features indicate why people want to send their snaps during travel – and that requires mobile data, which is cheaper on a local network carrier than in case of international roaming.

The Huawei P20 Pro isn’t sold via US carriers officially, however it is being sold on eBay (SIM locked models bought from other countries). Users can buy it officially from carriers in the UK, China, Europe, and Canada.

For instance, Rogers was taking pre-orders for P20 regular and P20 Pro, and the carrier even offered a Huawei MediaTab T3 with the buy of either of the two models on a 2-year select plan. Likewise, Fido was offering more or less the same deal in terms of pricing but slashed the priced to $0 if the consumer signed up to its big contract plan.

Another example is the carriers selling Huawei P20 in the UK. EE was selling P20 at $47 per month if users signed up to its 24-month contract, and the P20 was being offered for $55 per month if the buyer signed up for the same length of time. Each model comes with a small upfront expense, but different tariffs are also offered.

O2 was also offering P20 at $47 per month and P20 Pro at $55 per month, again with an upfront expense. Three and Vodafone also had a variety of plans on offer.

Whether you own a Rogers, Fido, or Vodafone P20 Pro, you can follow these guidelines to make it SIM Free.

Get Unlock Code For Huawei P20 – From Where?

You can obtain unlock code from unlockbooot.com – Unlockboot.com is an online site that offers legit unlocking services for smartphones, including Huawei P20 unlock. It’s a legal and safe service that is guaranteed and consumed by thousands of Huawei users who need to use another country’s SIM on their device.

How Does It Work? What Are the Benefits?

There are multiple benefits for unlocking Huawei P20 Pro. A few of them are as follows: you are free to use Huawei P20 on any global network carrier, including T-Mobile USA, AT&T, Claro, Orange, SFR, Fido, Telus, Rogers and many others; you’ll also double the value of your device and avoid costly roaming fee.

Get your Huawei P20 unlock code by following these steps:

Step 2: Find the IMEI code of the device. It’s a 15-digit number unique to each device. It can be found by dialing *#06# on the device. Another way to receive IMEI of Huawei P20 is to take out the battery and read it from the sticker at the device’s back. The unlock code the user receives depends on the IMEI, so this IMEI should be correctly submitted. 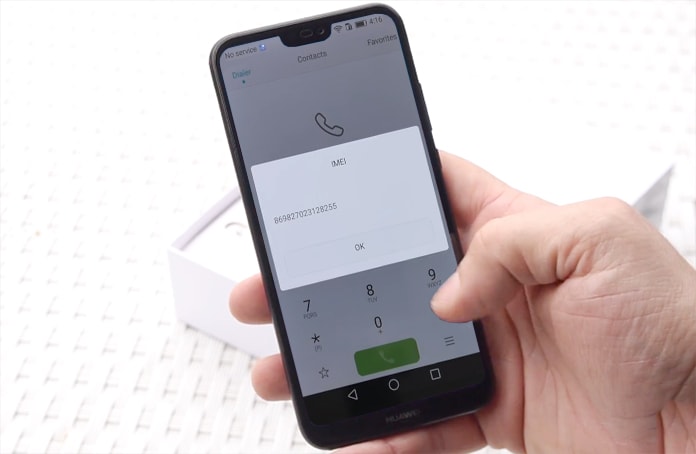 Step 3: Enter the IMEI number on the website and click on the Unlock Now button. Note! We need the IMEI number only because this is an IMEI-based service and it works for ANY carrier including AT&T, T-Mobile, Verizon, Sprint, Telus, Rogers, Orange, Fido, O2, Vodafone, Three, Telia and any other network. 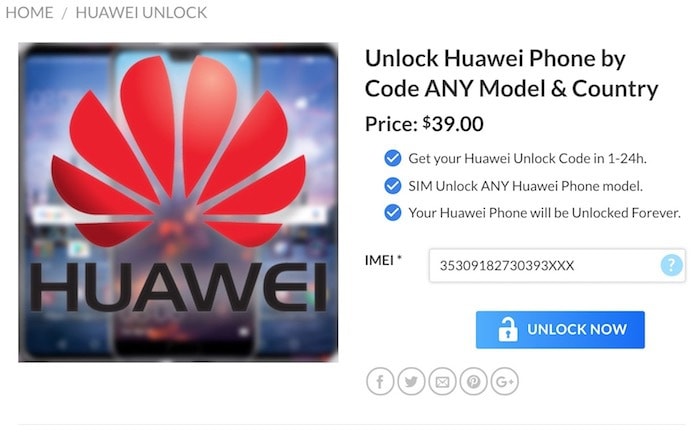 Step 4: Enter the email address – where you wish to get the unlock code. Make sure you correctly enter it, otherwise, it can be sent to the wrong address. Also, check your SPAM folder after the designated time of the email receivable has passed. 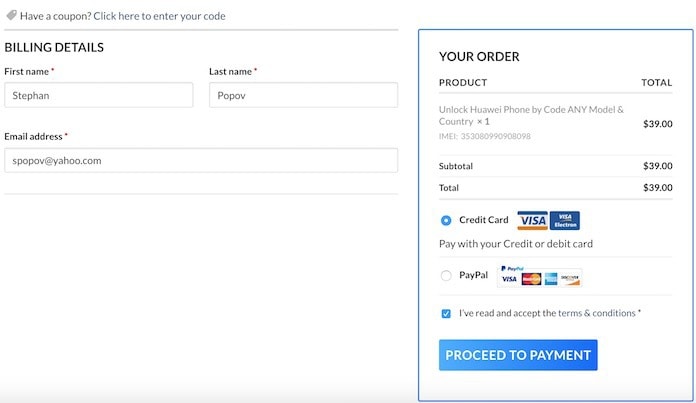 Step 5: Lastly, prepare yourself to pay. There are 2 payment methods via which the purchase of Huawei P20 unlock code can be done: Credit Card and PayPal. Select your preferred method of payment; we guarantee both methods are safe. 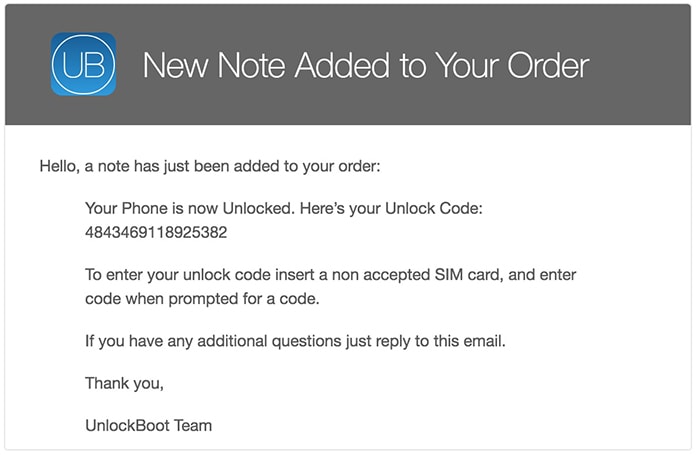 After you’ve placed the order, a confirmation email will arrive in your Gmail/Yahoo/Hotmail/Outlook/Apple Mail, and you’ll receive the unlock code for Huawei P20 shortly after.

1. Put a non-supported SIM card in your Huawei P20 phone, other than the SIM card given to you by the official carrier that sold the device.

2. After a while, your P20 Huawei will show “SIM Network Unlock PIN” or “Enter Unlock Code.” 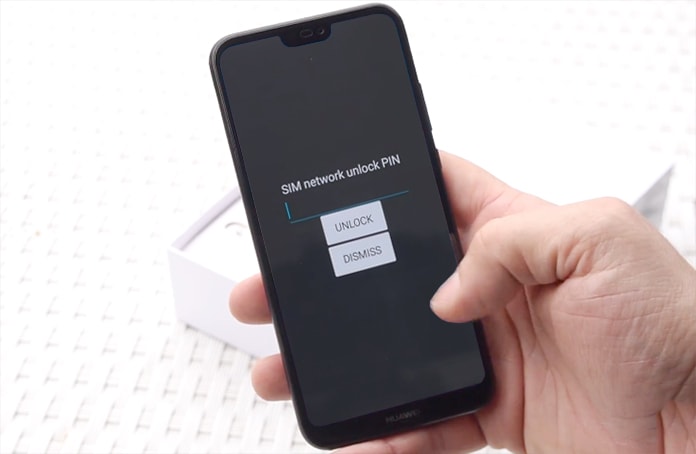 3. Put the “unlock code” inside the empty field. 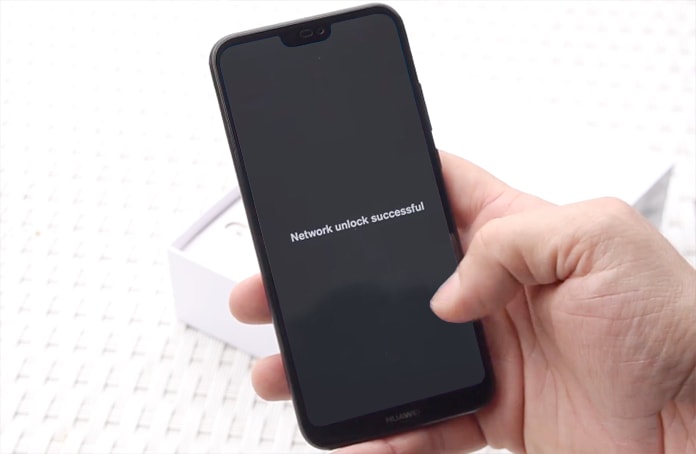 4. The “Network unlock successful” message will then show on your screen.

That’s all that is needed to unlock Huawei P20 permanently by IMEI. It won’t damage your device and give you the perks of international roaming, double value phone, and more.