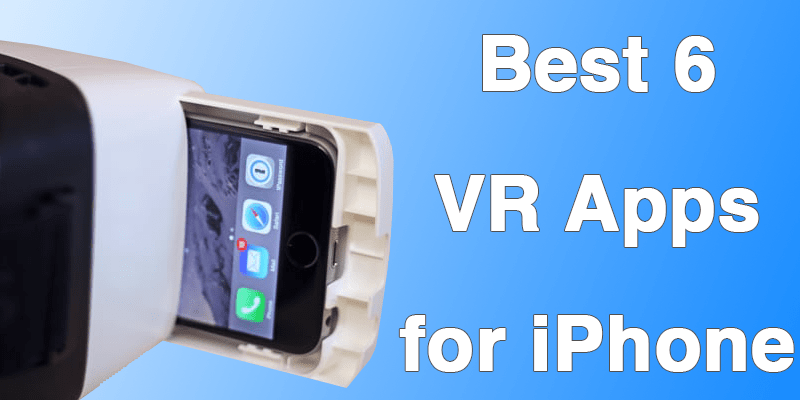 It’s not hard to notice that Google leads the VR game in mobile arena, and Apple doesn’t seem to be gearing up to compete. But that doesn’t mean you should buy an Android phone. You can have an amazing VR experience on iPhone. A VR headset (doesn’t cost much) and best VR apps for iPhone is all what you need to begin.

VR Headset and the Best VR Apps for iPhone

The VR headset isn’t something you can’t afford. Just go to the unofficial Cardboard site to get one. After that, let’s see what the best VR apps for iPhone are to take a trip to the moon, retail stores, etc.

This VR app covers music, travel, sports, movies etc. It has a big collection of 3D videos in the VR world. Just search for the buttons and options to navigate through. If kids want to have then experience, show the animated short clip called “The Invasion”.

One of the best VR apps for iPhone, this app is an eye candy for space and moon lovers. With this app (and some ads), you’ll land on the moon’s surface. And from there, you can see the International Space Station and the Earth. And if your headset allows, you can move here and there. The visuals will leave you mesmerized.

Want to visit an exotic Island in the Caribbean? Or Brussels? This app will take you there. It will also enable you to create 3D photos and keep them saved in the collection.

This is also in the list of best VR apps for iPhone. It provides great cinematography, including a climb to the World Trade Center, kids’ documentary, and Pluto’s virtual visit.

This app is a mix between Jaunt and NYT VR. It contains best highlights of both. Vrse focuses on VR cinema. You can download the available videos or stream them online.

How can YouTube be left behind in the race for best VR apps for iPhone? Add “360” or “VR” at the end of any search query to discover videos. YouTube also has a channel called “360 Channel” for VR videos. The tech is still under development, so expect more in the near future.

At the end, we’ve to say that we hope that Apple does more in the VR arena. They said they were selling view master VR headsets, but there’s none available in their stores. Either they’re skipping it, or thinking something bigger. No matter what, you can enjoy the experience with best VR apps for iPhone.