When the world has first moved on from Floppy Disks to USB flash drives, the world was quite surprised. Even that’s been more than 2 decades now, and the surprise factors have faded. But has it really? Because no matter how fast of a flash drive you might have used, how big were those in terms of capacity? Not 2 terra bytes of course because a flash drive with such capacity had never existed in a consumer market before. 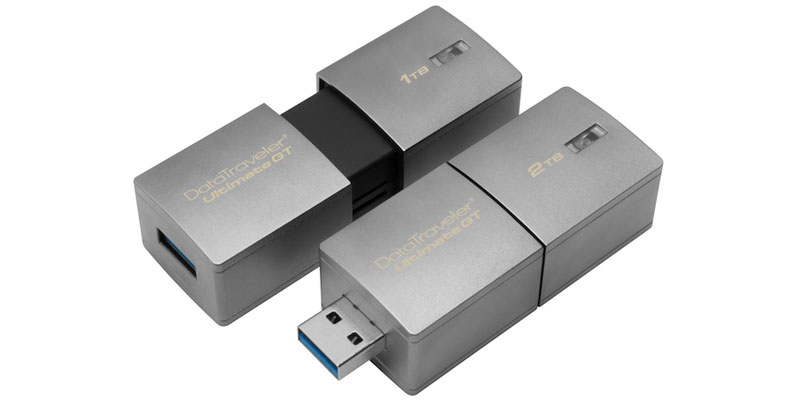 That’s a statement of the past. 2017 has brought its wonders and Kingston now unveils a 2 TB flash drive at Consumer Electronic Show (CES) 2017. There is a 1TB variant as well. The product goes by the title DataTraveler Ultimate Generation Terabyte (GT).

What’s the benefit of having the Kingston 2TB Flash Drive?

To hold data this much, up until this point either built-in mechanical hard drives in a computer or portable USB hard drives were the only feasible options. SSDs that are bigger than 512 GB in capacity are typically very costly so not very feasible, and the world hasn’t quite got accustomed to SSDs yet. Of course, people are transitioning fast from HDDs to SSDs and a lot of computers, even the mid-range ones would be equipped with SSD in the year 2017 but up until this point the hard drives are still occupying the largest market share.

In a world where mechanical hard drives are the only feasible option for storing crazy high storage capacity like 3 TB in one single package, it is truly a benefit to have something like the Kingston DataTraveler Ultimate Generation Terabyte flash drives. Just imagine, now you can carry around 70 hours of 4K video footage just in your pocket. Or maybe backup your entire home computer in a tiny flash drive. With a USB 3.1 connector, data transfer speeds aren’t going to be an issue.

Kingston has opted for more common standard USB ports, rather than moving towards a still-uncommon USB C port setup. Data could be read and written in USB 3.1 Gen 13 speeds. This flash drive is even capable of acting as a secondary storage to any computer system, if you don’t mind leaving it connected to a USB port permanently.

All popular operating systems would support this flash drive. Kingston provides a 5 year official warranty for the product as of yet. Some useful maintenance software are included inside the DataTraveler Ultimate GT storage.

This massive thumb drive is currently priced $1,000 on Amazon. Would you purchase this, or a massive SSD instead?