7 billion people live on this planet and there’s a plenty lot of different languages that helps them communicate with each other. Learning a language that’s not someone’s mother tongue is quite a difficult task to achieve, however with improved computing technology these days it’s no more ‘impossible’. Duolingo is a very popular app, if not the most popular app for learning a new language. 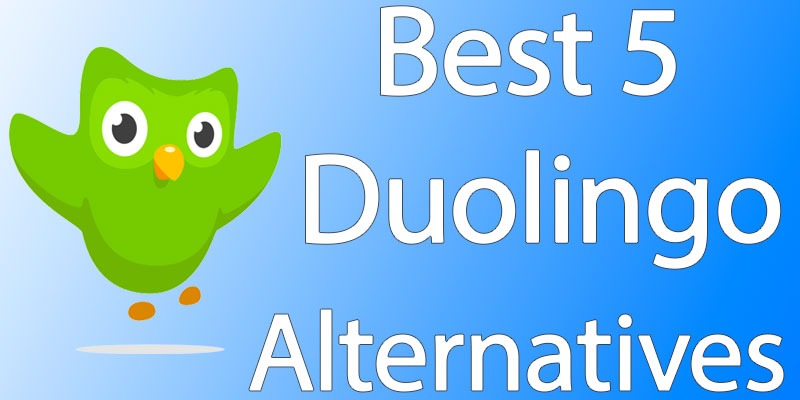 Duolingo is available on both iOS and Android platforms and it supports a lot of languages that are being spoken and written in various parts of the world. The teaching process on Duolingo is quite effective, thus anyone interested could follow the curriculum and learn a new language in the most interesting way possible.

List of the Best Duolingo Alternatives for iOS and Android

As the fame of Duolingo is growing, smartphone users are now looking for more similar apps in this genre. Duolingo being very popular, isn’t really all bug-free and some specific languages might not be available on the platform. There is some teaching gap to learn languages like Chinese, and these gaps need to be filled up for effective learning. As a result, the alternatives to Duolingo are growing very popular as well. As of yet, a lot of Duolingo alternatives had been seen in the Google Play Store and App Store, and we have compiled a list of 5 of them. 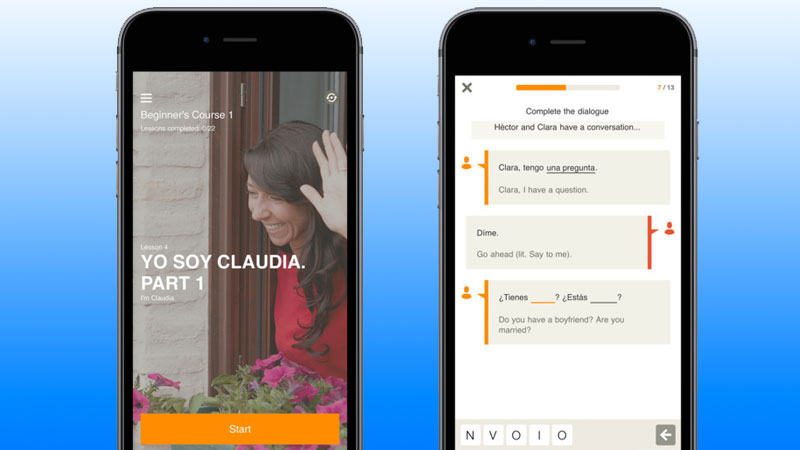 Some people want their language training app to easy and simple, some would want interactive gestures as well as the required information on the screen. Babbel does the latter, it’s extensively good at showing the required information as well as interactive actions so that you can learn a language better. Duolingo has 18 languages which are certainly a plus, but Babbel’s 14 language isn’t a little number either. Chances are, the language you are trying to learn is available within the Babbel interface.

All the lessons are put in a very informative and effective manner where each of the lessons is divided in 10 to 15-minute sessions. This way, a learner would get a better grip on their topics. Also, a chat bot is included so that a learner can make a conversation with that in the language they are learning. The AI can identify a natural style of chatting, thus you should get fantastic feedback from this app. Download Babbel for free from App Store or Get the Android Version from Google Play. 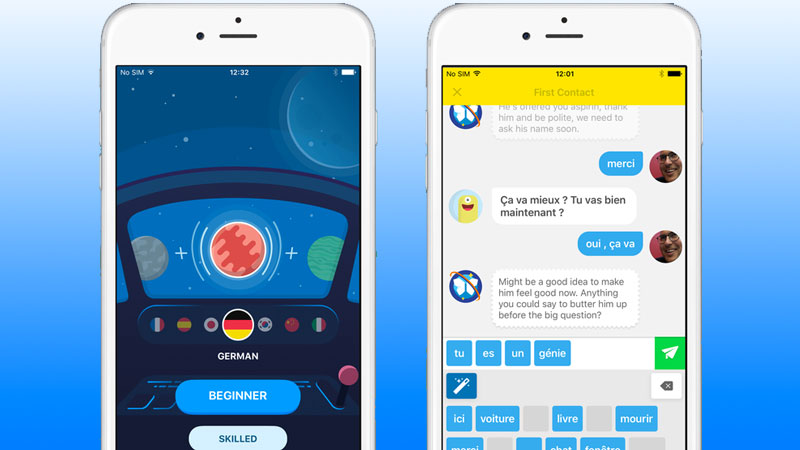 So if you can’t live with the only 18 language teaching material collection in Duolingo, then you should go with Memrise. There is a huge collection of teaching materials and contents in 100 languages. Also, the interface is quite different from Duolingo. It has a game-like interface where the learner gets to act like a law enforcement agent undercover where they need to learn a language and practice in the natural way of speaking and writing. The apprentice would then visit a ‘universe’ in the app interface and communicate with others in the language they have chosen to learn. It is interesting, and fun to learn. Download Memrise for iOS or Android. 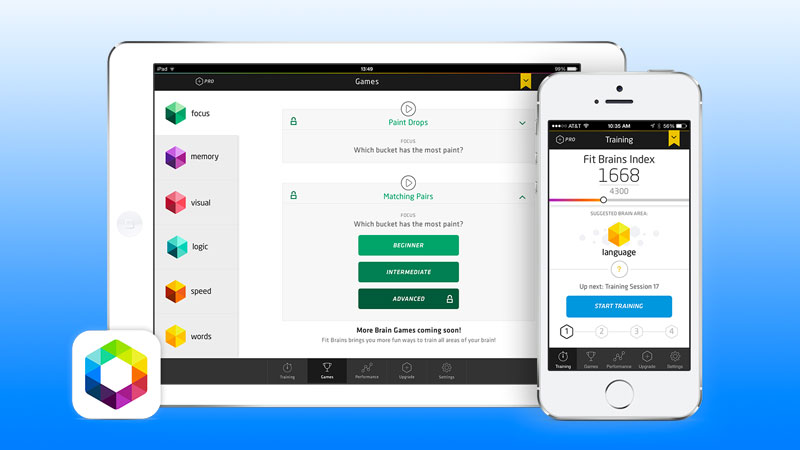 Back in the time when smartphones weren’t available, Rosetta Stone came up with the first computer-assisted language learning service. The old school program has made its way to the iOS and Android operating systems so that people can learn a new language anywhere they want, even on the go. 24 major languages that are being used all over the world are included within this app’s interface. A lot of language experts and linguistic trainers contribute to Rosetta Stone to make it a better platform for learning. The interface is slick and lightweight, anyone should love it. Download Rosetta Stone for iOS devices or use this link for Android Devices. 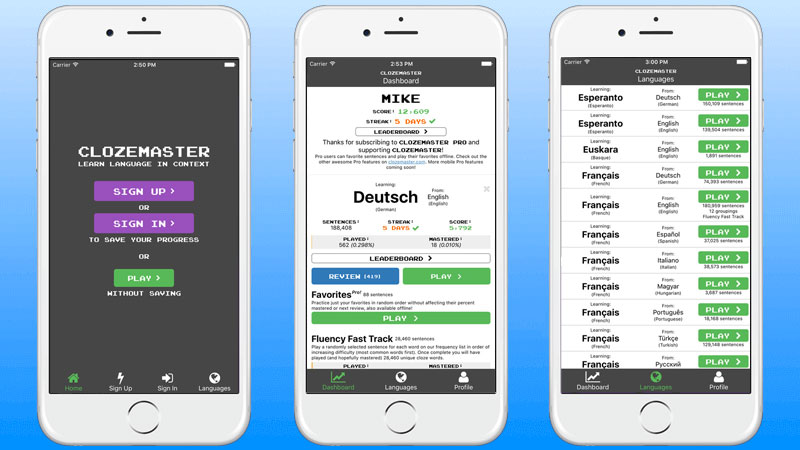 Clozemaster is listed in the app stores as a game, rather than a language instructor. And if Duolingo isn’t your favorite, then the Clozemaster app can really be. There are more than 100 languages in this app’s interface, all of which could be learned through the 16-bit game like the interface of Clozemaster. Since it’s categorized as a game, the developers have added interactive fill in the blanks and audio-visual sections along with them. The contents are at the advanced level, in contrast to Duolingo’s pretty much introductory level contents. Clozemaster is totally free with no in-app or off-app purchase, and it’s only available for Android. Get Clozemaster for iPhone & iPad or Android. 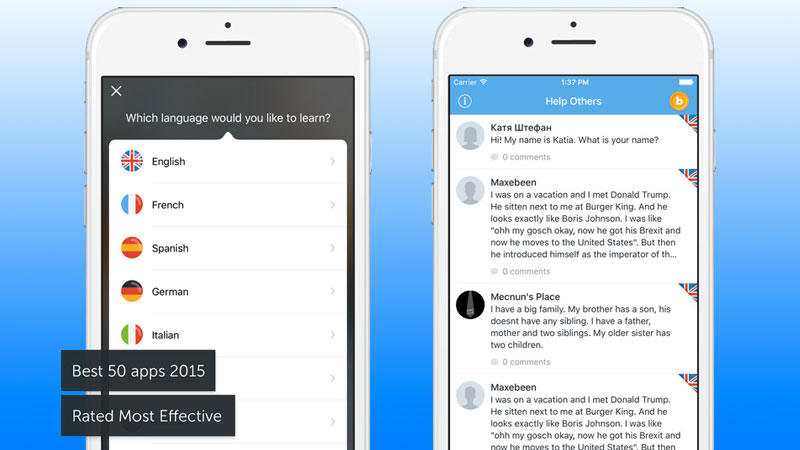 The app busuu is for people who are willing to move to the advanced level of a language. Duolingo is mostly based on the primary level of language teaching, no matter which out of 18 languages you choose on that platform. On the other hand, busuu focuses on moving to the upper levels of a language of which you have already passed the preliminary levels. Since the contents have been developed and improved by a bunch of linguistic experts and teachers, they are going to maintain the absolute standard in language teaching. As a cherry on top, you could chat with real persons speaking your preferred language as a mother tongue. Download busuu today from App Store or Google Play.

Conclusion: If you couldn’t like Duolingo for some reason, you would certainly love these 5 selections for language training. These happen to be cheaper or free.