SSDs (Solid State Devices) provide higher performance as compared to the more traditional spinning hard disks. The flash-based memory devices consume less battery power and so are able to read and write data with much higher speed while at the same time conserving battery. As a result, they are breaking into the HDD market and replacing the role of regular hard disks in laptops and other high-end PCs. 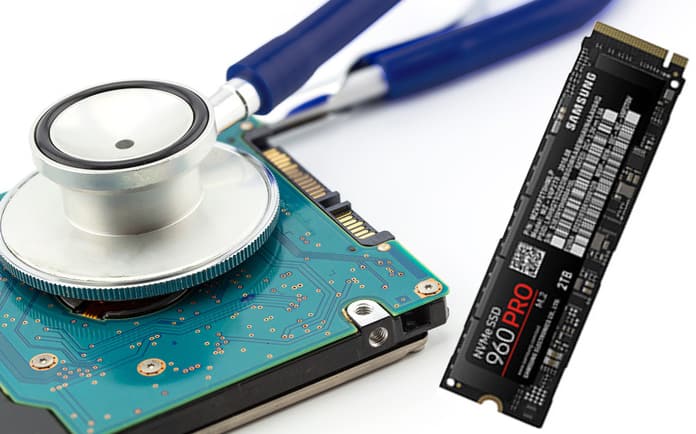 The SSD system boots up really rapidly and is ready to work within a few seconds. In case there are apps installed on the SSD, the drive will load apps faster and it will copy Gigabytes of data all within just a few seconds. SSDs provide their users with high performance, high speed and much reduced power consumption. However, the only problem is that since SSDs are still a pretty novel technology, they lag behind hard disks as far as lifespan and reliability are concerned.

We have collected the best free Windows and Mac tools to check SSD health and to monitor performance.

HDSentinel is a hard disk monitoring software and it supports Linux, Windows and even DOS. The HDD/SSD monitoring tool is specially made to analyze, test, diagnose and then repair any HDD/SSD problems while at the same time also displaying SSD health. It doesn’t matter if there is an internal or an external hard disk connected with the USB or e-SATA, the tool can scan and recognize all SSD problems and then generate reports with a possible fix to solve errors. 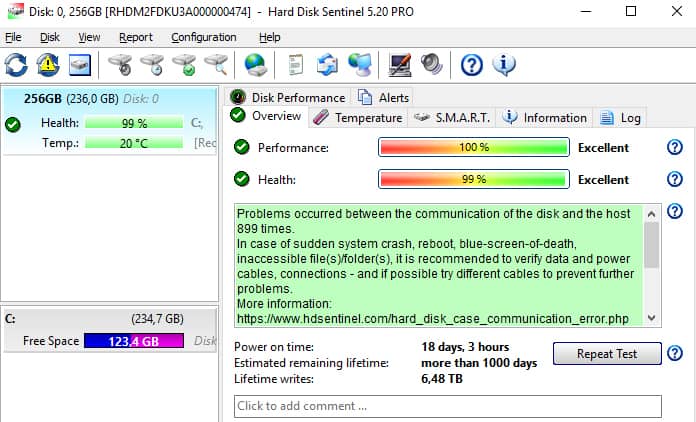 Once HDSentinel is installed, the tool will run in the background and check out the SSD health status and warn the user in case there is any error. The HDD/SSD monitoring tool is even capable of measuring the disk transfer speed in real time which can then be used as a benchmark or for purposes of detecting any possible hard disk failures or performance degradations.

This tool is a drive management software which will allow the user to monitor estimated drive life remaining, drive health and even S.M.A.R.T attributes. The SSD Toolbox is capable of running quick as well as full diagnostic scans in order to test the read and write functionality of an Intel SSD. 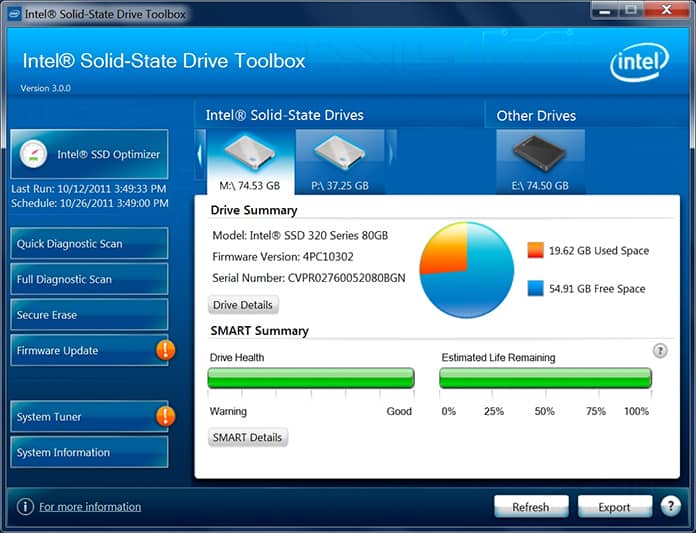 The tool is quite capable of optimizing the performance of an Intel SSD using the Trim functionality and it can update the firmware on a supported Intel SSD. It is possible to even check and tune the system settings for optimal Intel SSD performance, power efficiency and endurance. The tool is capable of supporting a Secure Erase on secondary Intel SSD.

This will allow you to constantly monitor the Solid State Hard Disk’s health status as well as the temperature. It will be possible for the user to use it to check up on the SSD and other Hard Disk types. After installation of this tool it will be able to monitor the hard disk performance in real time while you are busy with other work on the system. 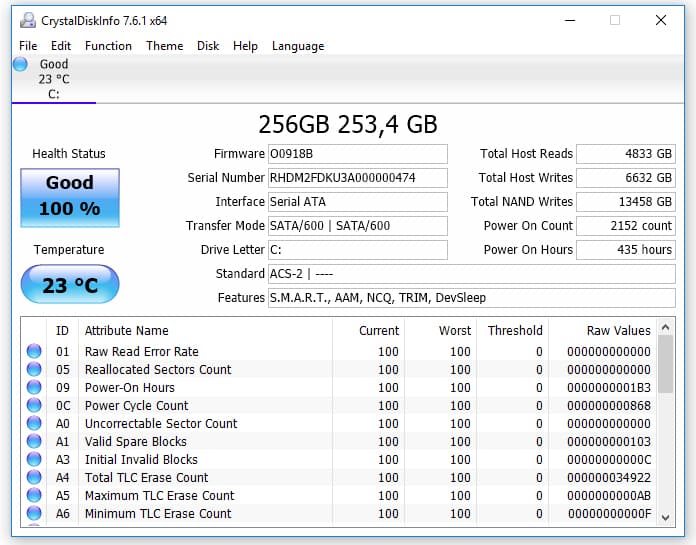 The tool is even capable of checking your disk’s Read and Write speed and S.M.A.R.T. It is also an open source SSD tool which can allow you to find out quite a lot of information relating to your SSD or HDD. The software can even show error rates on the disk such as ‘read error rate’. The performance measuring can scale with seek time performance, throughput performance and others can be viewed in real time with total Power-on time.

In case what you are looking for is a proper benchmarking tool to test out your Hard Disk then Crystal Disk Mark is the tool for you. This is because it is capable of testing your Hard Disk in Sequential Reads/Writes, Random Reads/Writes and QD32 Modes. 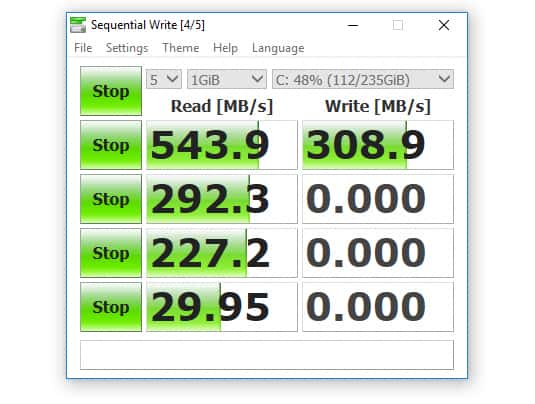 In case you want to compare the SSD performance, Read/Write speed in random as well as sequential with other manufacturers or even if you just want to confirm if your SSD or HDD is in fact offering the same kind of performance that was specified by the manufacturer then this is the best open source tool. It can check one disk or multiple disks based on their read-write performance.

The Samsung Magician software happens to have straightforward graphical indicators to show the SSD health status and Total Bytes Written (TBW) in a very simple manner. You yourself can decide SATA and the AHCI compatibility and status. There is an updated Benchmarking feature which will allow users to test and SSDs to easily and seamlessly compare between the speed and performance. The tool can even be used to optimize the Samsung SSD using three different profiles such as Maximum Performance, Maximum Reliability and Maximum Capability along with really detailed descriptions for each OS setting. 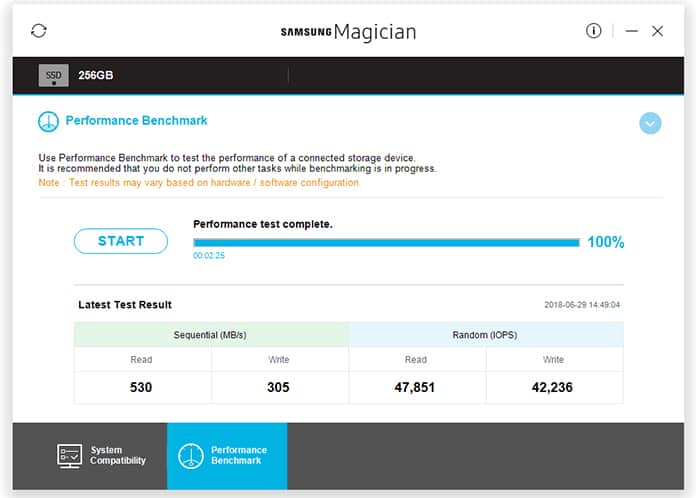 The Samsung Magician tools will allow you to check the random as well as sequential read/write speeds of the SSD to ensure the system is always running quickly and is up to the benchmark. The additional option is to check TBW (Total Bytes Written) which will help assess overall health and the estimated remaining lifespan of the SSD or the HDD. The system Compatibility Check is there to keep a check on there being no conflict between the SSD and the system. Secure Erase will allow the user to easily wipe out SSD in a secure manner to avoid loss of sensitive data. In case you happen to be a Mac user, you have drawn the short end of the stick because sadly, it is only available for Windows users.

This package will give you access to two utility programs (smartctl and smartd), which will allow you to control and monitor your hard disk. The tool offers real time monitoring of your Hard Disk as well and even lets you analyze and then warn you of any potential disk failures or degradation. 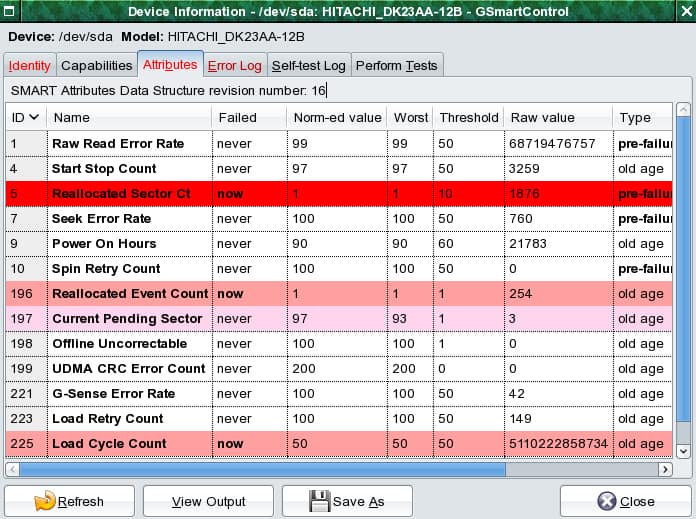 Smartmontools is able to support ATA/ATAPI/SATA-3 to -8 disks as well as SCSI disks and tape devices. The disk tool is capable of running on Mac OS X, Linux, FreeBSD, OpenBSD, NetBSD, OS/2, QNX, Cygwin, Solaris, Windows, eComStation and even from a Live CD.

The SSD Utility is for the Toshiba Drives, which is a GUI based tool for managing OCZ SSDs. the dashboard in the tool will allow a real time overview of system status, interface, capacity, health etc. It is possible to perform the health monitoring of the Toshiba SSDs and to check on how much life remains in the SSD as well as finding out if the SSD is hooked up to the suitable ports. It even allows you to set all the correct modes in order to ensure the highest performance. 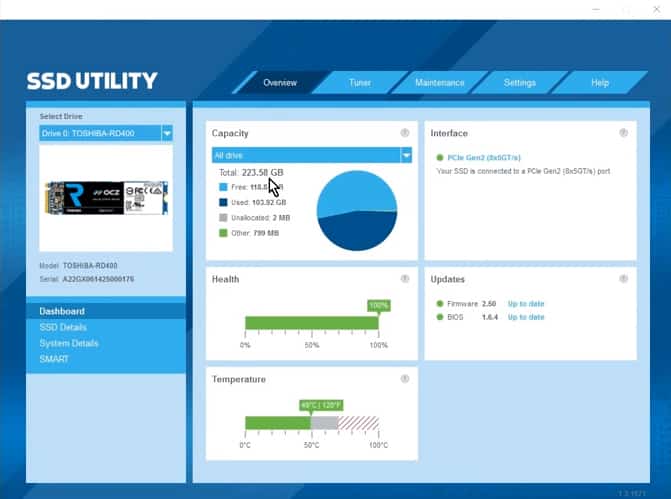 Blackmagic Disk Speed Test is a simple tool to check HDD or SSD performance. All you need to do is to click on the Start button and the app will do the rest. This tool is very useful if you want to decide whetter the SSD or the HDD drive has the best performance on your Computer. 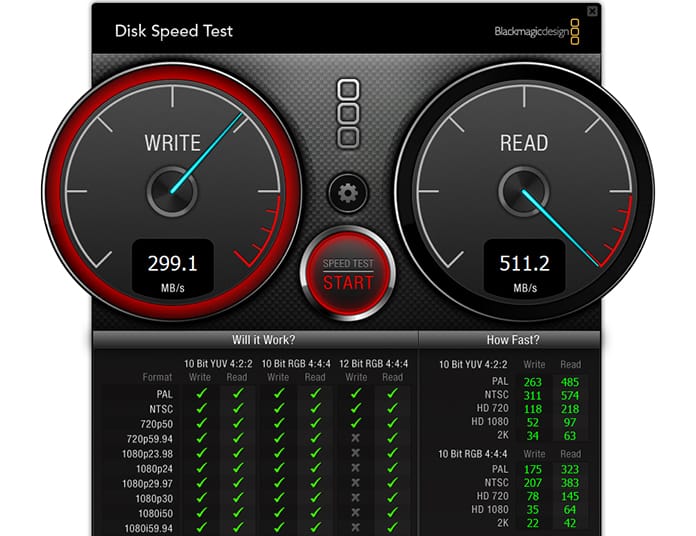 You can also use Blackmagic Disk Speed Test to test external SSD or HDD drives that are connected via USB. The disk’s Write speed is on the left and the Read speed is on the right of the screen. The difference between HDD and SSD can be seen visually with this app and you see the disk speed visually for each disk type. You can also see how fast the files will be loaded from your hard drive, how fast they will be written and how fast the apps will be started from the drive.

This is a great tool to install and let run in the background. It daily tracks Writes and the total usage of the SSD on a day by day basis. It can also help to predict for how long your SSD will continue to run and function and even give a time span for within which you should start looking around for a new SSD. Also, the Solid Disk tool is capable of giving feedback on what to optimize in case there are too many disk writes or to extend SSD life.

In conclusion, there is no doubt that SSDs are more fragile than HDs when it comes to lifespan, despite the fact that SSDs have no moving parts. However, this is because the technology is still not fully developed but these tools will help get the most out of your SSDs.

This tool is completely dedicated to Solid State Drives and is capable of measuring SSD’s lifespan and it can even allow you to back up data before this life runs out. It is a great tool to install on the PC and to monitor the SSD’s health in real time to keep the user informed on any critical defects. The SSD Life is also tested with numerous SSD drives in order to ensure compatibility and make sure it works with most SSD manufacturers such as OCZ, Kingston etc. 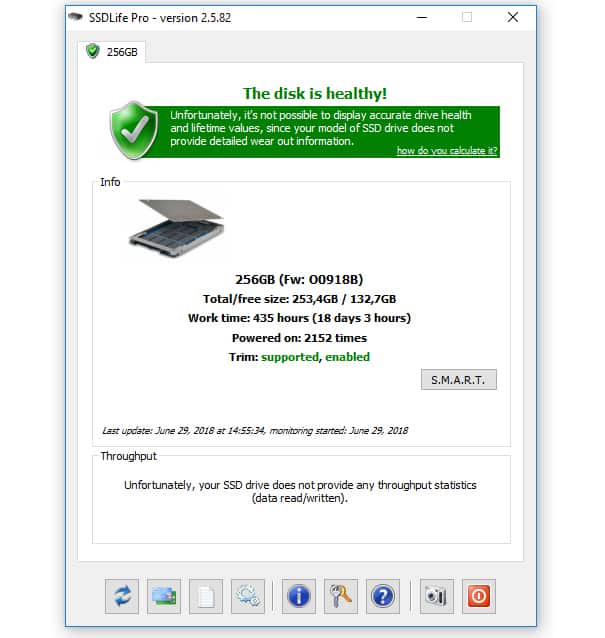 Mac users, on the other hand, will feel that there are not many tools that they can use to maintain and check the performance of SSDs. Many of these are for Windows users. If you are a Mac user, we recommend you to try DriveDX App.

There also happen to be quite a few tools out there to tweak SSD or to enable TRIM on SSD to improve its performance. These are recommended if any performance issue is noticed or when working on your system. It is highly recommended to always keep an eye on your SSD by making use of one of these SSD health monitoring tools for your laptop. In addition, ensure that you have a backup of all the data on your computer or system before making any major changes.